I have read books by the three authors of this book separately so I was intrigued by a book written by them collectively. I thank TLC Book Tours for sending me a copy of The Glass Ocean by Beatriz Williams, Lauren Willig and Karen White at no charge for my honest review. 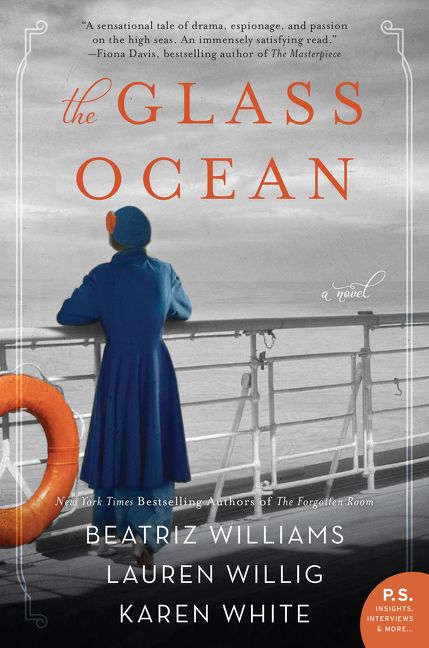 About The Glass Ocean:

From the New York Times bestselling authors of The Forgotten Room comes a captivating historical mystery, infused with romance, that links the lives of three women across a century—two deep in the past, one in the present—to the doomed passenger liner, RMS Lusitania.

May 2013
Her finances are in dire straits and bestselling author Sarah Blake is struggling to find a big idea for her next book. Desperate, she breaks the one promise she made to her Alzheimer’s-stricken mother and opens an old chest that belonged to her great-grandfather, who died when the RMS Lusitania was sunk by a German U-Boat in 1915. What she discovers there could change history. Sarah embarks on an ambitious journey to England to enlist the help of John Langford, a recently disgraced Member of Parliament whose family archives might contain the only key to the long-ago catastrophe. . . .

April 1915
Southern belle Caroline Telfair Hochstetter’s marriage is in crisis. Her formerly attentive industrialist husband, Gilbert, has become remote, pre-occupied with business . . . and something else that she can’t quite put a finger on. She’s hoping a trip to London in Lusitania’s lavish first-class accommodations will help them reconnect—but she can’t ignore the spark she feels for her old friend, Robert Langford, who turns out to be on the same voyage. Feeling restless and longing for a different existence, Caroline is determined to stop being a bystander, and take charge of her own life. . . .

Tessa Fairweather is traveling second-class on the Lusitania, returning home to Devon. Or at least, that’s her story. Tessa has never left the United States and her English accent is a hasty fake. She’s really Tennessee Schaff, the daughter of a roving con man, and she can steal and forge just about anything. But she’s had enough. Her partner has promised that if they can pull off this one last heist aboard the Lusitania, they’ll finally leave the game behind. Tess desperately wants to believe that, but Tess has the uneasy feeling there’s something about this job that isn’t as it seems. . . .

As the Lusitania steams toward its fate, three women work against time to unravel a plot that will change the course of their own lives . . . and history itself.

You can purchase The Glass Ocean at Harper Collins

Lauren Willig is the New York Times and USA Today bestselling author of several novels. She lives in New York City with her family.

Karen White is a New York Times and USA Today bestselling author and currently writes Southern women’s fiction. She lives in Georgia with her husband and two Havanese dogs.

I have to note that I did wonder at first if a book written by three different authors would prove to be as seamless as you would expect from a book written by a single person. I’m very pleased to report that if I had read the book without that knowledge I would have assumed it was penned by a single author.

The story takes place in two time periods; 2013 when Sarah, a woman who has written a best selling book finds herself struggling to write another. Her finances are a mess and her mother needs round the clock medical care. She thinks she finds the story she is looking for when she goes through her great grandfather’s trunk that was sent back when the Lusitania was sunk.

It also takes the reader to 1915 for that final sailing of the Lusitania.  There we meet Caroline and her husband Gilbert; Caroline is a Southern belle of an old family who married Gilbert, a self made man. They are traveling to England with a close friend from her childhood, Robert who is going home to see his family. Also part of the narrative are two sisters; one of whom is a forger the other a grifter.

Usually when I write about books in dual timelimes I end up preferring the half of the story that takes place in the past. With The Glass Ocean that wasn’t the case! I ended up liking both sections equally. In fact I read the book in one sitting as I really didn’t want to stop until I got the end. Knowing the Lusitania was going to sink didn’t take away from her leisurely passage from New York. I almost hoped history would change as I read but it was not to be.

This is a great read with a sweet romance and a solid mystery at its center. It makes for a lovely read that keeps you guessing until the end.