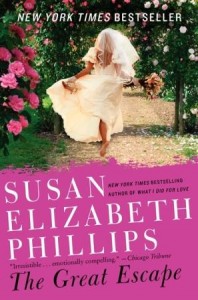 • Paperback: 448 pages
• Publisher: William Morrow Paperbacks; Reprint edition (April 2, 2013)
The dazzling sequel to Susan Elizabeth Phillips’s beloved bestseller Call Me Irresistible
Lucy Jorik is a champ at not embarrassing her family—not surprising, since her mother is one of the most famous women in the world. But now Lucy has done just that. Instead of saying “I do” to the most perfect man she’s ever known, Lucy flees the church and hitches a ride on the back of a beat-up motorcycle with a rough-looking stranger who couldn’t be more foreign to her privileged existence. At his beach house on a Great Lakes island, Lucy hopes to find a new direction . . . and unlock the secrets of a man who reveals nothing about himself. But as the hot summer days unfold amid scented breezes and sudden storms, she discovers a passion that could change her life forever.

Susan Elizabeth Phillips is one of our biggest women’s fiction stars soaring onto the New York Times bestseller list with Dream a Little Dream. She’s the only four-time recipient of Romance Writer’s of America’s prestigious Favorite Book of the Year Award. Susan delights fans by touching hearts as well as funny bones with her wonderfully whimsical and modern fairy tales. A resident of the Chicago suburbs, she is also a wife and mother of two grown sons.
Visit Susan at her website, susanelizabethphillips.com, like her on Facebook, and follow her on Twitter.

Lucy Jorik is the adopted daughter of the former President of the United States. She has always been the perfect daughter, the responsible daughter – never straying from what is expected of her.  It’s her wedding day and she’s marrying the perfect man; a man who treats her with love and kindness, loves her family and is beloved by everyone, everywhere.

She panics and leaves him at the altar and runs away with a rather shady man on a motorcycle.
Not a very responsible, perfect thing to do.
She just doesn’t feel ready to marry the perfect man and settle down to the perfect life. She’s not completely happy and isn’t sure “who she is” so she wants to find herself.

So she runs off with this motorcycle man whom she sort of recognizes as a friend of her now ex-fiance and she tries to disguise herself as she is one of the best known women in the country. After two weeks she still isn’t sure what she wants so she continues to run but she runs right towards motorcycle man despite claiming to hate him.

Now I like my escapist novels as much as the next reader but they need to not be so jarring that I come out of the story to think about what 31 year old woman would act this way? I simply could not understand a woman of her age and background acting the way she did nor her parents condoning the behavior.

There is also a secondary plot about another woman, her young African American ward the man who loves her and her friendship with Lucy. And a tertiary plot about a famous woman also trying to figure out who she is.  Yes, too many plots for one book.

The characters are developed but I can’t say I liked any of them; Lucy was too old for this behavior. Panda (seriously?) was just ridiculous; he is educated, wealthy and has access to anything he could want and yet he acts as if he is not good enough for Lucy who is acting like a spoiled brat?  Lucy’s parents are over protective and treat her more like she is a teenager rather than a productive woman entering her 30s.

The ending, which consists of (SPOILER ALERT) Lucy and Panda getting together is absurd. Her methodology of “catching” him, her parent’s behavior during their reunion and his acceptance of said behavior just doesn’t ring anywhere near true. Granted this is escapist, romantic fiction but I didn’t read anywhere that it was absurdist fiction.

I have not read anything else by Ms. Phillips and I do understand that this is a companion book to another novel. I obviously don’t know if having read the other novel would have enhanced my appreciation of this book. I just didn’t enjoy this one as a stand alone book.

You can see The Great Escape Tour Schedule

You can purchase The Great Escape from Amazon.com

Disclosure:  I received a free copy of The Great Escape from TLC Book Tours for my honest opinion. I received no compensation for this post.