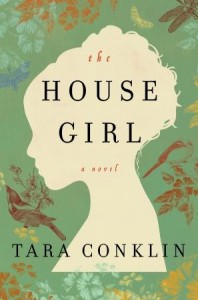 
• Hardcover: 384 pages
• Publisher: William Morrow (February 12, 2013)
Two remarkable women, separated by more than a century, whose lives unexpectedly intertwine . . .
2004: Lina Sparrow is an ambitious young lawyer working on an historic class-action lawsuit seeking reparations for the descendants of American slaves.
1852: Josephine is a seventeen-year-old house slave who tends to the mistress of a Virginia tobacco farm – an aspiring artist named LuAnne Bell.
It is through Lina’s father, renowned artist Oscar Sparrow, that Lina discovers a controversy currently rocking the art world: Art historians now suspect that the revered paintings of Lu Anne Bell, an antebellum artist known for her humanizing portraits of the slaves who worked her Virginia tobacco farm, were actually the work of her house slave, Josephine.
A descendant of Josephine’s would be the perfect face for the lawsuit—if Lina can find one.   But nothing is known about Josephine’s fate following Lu Anne Bell’s death in 1852.  In piecing together Josephine’s story Lina embarks on a journey that will lead her to question her own life, including the full story of her mother’s mysterious death twenty years before.
Alternating between antebellum Virginia and modern-day New York, this searing tale of art and history, love and secrets explores what it means to repair a wrong, and ask whether truth is sometimes more important than justice.


Tara Conklin has worked as a litigator in the New York and London offices of a major corporate law firm but now devotes her time to writing fiction. She received a BA in history from Yale University, a JD from New York University School of Law, and a Master of Law and Diplomacy from the Fletcher School (Tufts University). Tara Conklin’s short fiction has appeared in the Bristol Prize Anthology andPangea: An Anthology of Stories from Around the Globe. Born in St. Croix, she grew up in Massachusetts and now lives with her family in Seattle, Washington.
Find out more about Tara at her website, connect with her on Facebook, and follow her on Twitter.

Lina is an attorney – an associate in a large firm in NY – trying her hardest to be the best and to get ahead when her boss hands her a case that could make her career. It’s a reparations case for slavery; she and another associate are to prepare a brief and find a plaintiff to be the “face” of the lawsuit so that they can sue major corporations for all of the free labor provided by slaves and use the money to fund scholarships, etc.

Josephine is a slave, a “house girl” in the home of LuAnne Bell,  woman dying from what I can guess to be cancer and a master who beats her and doesn’t see her as anything other than property. Her only freedom in her life comes when she is allowed to draw and paint with her mistress – and she has a talent. One very bad day Josephine decides to escape the failing plantation and take her chances at true freedom.

The stories of these two women intertwine when Lina, through her artist father and his connections finds that the famous paintings attributed to LuAnne Bell might actually have been painted by Josephine. The foundation that now owns the former Bell plantation does not want this to be true and is doing everything it can to prove it false.  Lina feels that a descendant of Josephine’s would make an excellent face for her case – if one exists.

Before I begin my review of the book I must say that I love the cover. It’s so very simple yet it draws you in. I know that had I been in a book store shopping this is a book I would have been drawn to – so kudos to whomever designed it. The story, though, is not simple at all. It’s involved, engrossing and for me at least it was impossible to put down. I read it in one sitting. The very first paragraph pulls you into Josephine’s story and doesn’t let you go. I must admit that Josephine’s portion of the book – it is told in a back and forth manner – was more interesting to me but Lina’s search for her history was NEARLY as fascinating. I am a lover of the historical so I do prefer the “olden times.”  It was when Lina’s personal life entered the story that I was a bit distracted. All of the hullabaloo about her mother did not lead where I expected it to and in my opinion did not add anything to the plot. That is the reason for my not giving the book a 5 rating.

Overall though, I loved it – obviously as I’m keeping this one for a second read. The hubby is reading it as I type and he is as engrossed as I was so it’s a book for both genders. It has fascinating characters, a thought provoking plot and it keeps you guessing. What more can you ask of a book?

You can see The House Girl Tour Schedule

You can purchase The House Girl on Amazon.com

One lucky reader (US/Canada) will win a copy of The House Girl. How do you win? It’s easy! Just hop on the Rafflecopter! Good luck everyone.

Disclosure:  I was sent a free copy of The House Girl by TLC Book Tours for my honest review. I received no compensation for this post.