The Huntress by Kate Quinn – Blog Tour and Book Review

I have several book by Kate Quinn on my “I so want to read these when I find the time” shelf. I am thrilled that TLC Book Tours sent me a copy of her latest, The Huntress at no charge for my honest review. 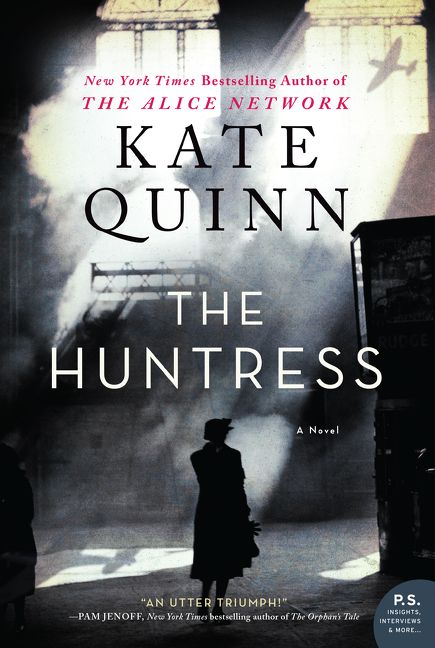 n the aftermath of war, the hunter becomes the hunted…

Bold and fearless, Nina Markova always dreamed of flying. When the Nazis attack the Soviet Union, she risks everything to join the legendary Night Witches, an all-female night bomber regiment wreaking havoc on the invading Germans. When she is stranded behind enemy lines, Nina becomes the prey of a lethal Nazi murderess known as the Huntress, and only Nina’s bravery and cunning will keep her alive.

Transformed by the horrors he witnessed from Omaha Beach to the Nuremberg Trials, British war correspondent Ian Graham has become a Nazi hunter. Yet one target eludes him: a vicious predator known as the Huntress. To find her, the fierce, disciplined investigator joins forces with the only witness to escape the Huntress alive: the brazen, cocksure Nina. But a shared secret could derail their mission unless Ian and Nina force themselves to confront it.

Growing up in post-war Boston, seventeen-year-old Jordan McBride is determined to become a photographer. When her long-widowed father unexpectedly comes homes with a new fiancée, Jordan is thrilled. But there is something disconcerting about the soft-spoken German widow. Certain that danger is lurking, Jordan begins to delve into her new stepmother’s past—only to discover that there are mysteries buried deep in her family . . . secrets that may threaten all Jordan holds dear.

In this immersive, heart-wrenching story, Kate Quinn illuminates the consequences of war on individual lives, and the price we pay to seek justice and truth.

The Huntress is available for purchase at Harper Collins

Kate Quinn is a native of Southern California. She attended Boston University, where she earned bachelor’s and master’s degrees in classical voice. A lifelong history buff, she has written four novels in the Empress of Rome Saga and two books set in the Italian Renaissance detailing the early years of the infamous Borgia clan. All have been translated into multiple languages. She and her husband now live in San Diego with two black dogs named Caesar and Calpurnia.

The Huntress kept me reading late into the night (morning?) as I found it very hard to put down. The only reason I did was because I simply could not keep my eyes open any longer. This tale of a woman who heartlessly kills and then goes on to live as a normal American housewife is startling. Ms. Quinn based her characters on real people so the story is all the more horrifying.

There are several timelines, people and story lines to keep track of as you delve into this dark time in history. WWII has ended but there are those that are still seeking the perpetrators of the Final Solution who have gone into hiding since the end of the war. Trying to find them where they hide in plain sight and send them for trial so that they pay for the crimes they committed. Ian and Tony work together to bring these Nazis out of their holes but one particular woman has been a long term target – she is known as The Huntress and it’s as if she has vanished from the earth.

Only one person has escaped from her – Nina, a member of the Russian air force. She was part of a squadron known to the Germans as the night witches. She knows the face of The Huntress and is the one who can identify her. She joins forces with the two men as she has her own reasons for wanting her brought to justice.

The various plots and time lines are handled seamlessly. The action moves back and forth between what is the current time in the book (the 1950ies) and the war years.  There The Huntress becomes the hunted and it becomes a matter of whether she will be brought to justice or escape again.

This is a truly compelling read that is still haunting me. I know I keep saying that I have sworn off WWII novels but something about this one called to me. It’s post war so I figured it wouldn’t have me dealing with too many battles and it didn’t. It is more a chase book as the three hunters try and catch their prey to right one more wrong from a horrible war. The writing draws you into the different time periods and different worlds of the main characters. It’s one I’ll want to read again.

Share
Tweet
Pin3
Share
Email
It’s Not Too Late to Get a Flu Shot – Flu Season is NOT Over Yet
Josephine’s Daughter by A.B. Michaels – Book Spotlight