I grew up on an island off the Jersey coast so I can appreciate a story about people living on an island. I thank TLC Book Tours for sending me a copy of The Islanders by Meg Mitchell Moore at no charge for my honest review. 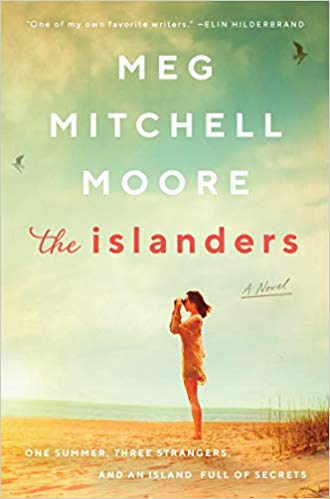 Anthony Puckett was a rising literary star. The son of an uber-famous thriller writer, Anthony’s debut novel spent two years on the bestseller list and won the adoration of critics. But something went very wrong with his second work. Now Anthony’s borrowing an old college’s friend’s crumbling beach house on Block Island in the hopes that solitude will help him get back to the person he used to be.

Joy Sousa owns and runs Block Island’s beloved whoopie pie café. She came to this quiet space eleven years ago, newly divorced and with a young daughter, and built a life for them here. To her customers and friends, Joy is a model of independence, hard-working and happy. And mostly she is. But this summer she’s thrown off balance. A food truck from a famous New York City brand is roving around the island, selling goodies—and threatening her business.

Lu Trusdale is spending the summer on her in-laws’ dime, living on Block Island with her two young sons while her surgeon husband commutes to the mainland hospital. When Lu’s second son was born, she and her husband made a deal: he’d work and she’d quit her corporate law job to stay home with the boys. But a few years ago, Lu quietly began working on a private project that has becoming increasingly demanding on her time. Torn between her work and home, she’s beginning to question that deal she made.

Over the twelve short weeks of summer, these three strangers will meet and grow close, will share secrets and bury lies. And as the promise of June turns into the chilly nights of August, the truth will come out, forcing each of them to decide what they value most, and what they are willing to give up to keep it.

You can purchase The Islanders at Harper Collins

Meg Mitchell Moore worked for several years as a journalist for a variety of publications before turning to fiction. She lives in the beautiful coastal town of Newburyport, Mass., with her husband and their three daughters. The Islanders is her fifth novel.

Anthony is an author who is having a life crisis so he comes to Block Island to stay at a friend’s relative’s beach house – a house sitter is needed and Anthony needs a cheap place to stay. Free is about as cheap as it gets so being a housesitter is a perfect option for him just now. All he wants to do is retreat from the world and wallow in his sorrow.

Joy is the owner of a bakery that makes mini whoopie pies. She is a divorced, single mother and she is a little worried about her daughter Maggie getting older and the new food truck that is coming from NY that will be selling macarons. Her rent is going up and she is worried that she won’t be able to save for her daughter’s college.

Lu is a stay at home mom who left a high powered job as a corporate lawyer. She’s married to a man who is a doctor in residency. They are staying on Block Island for the summer in his parent’s house. Lu is finding it a little hard to just be mommy, she needs a little bit more in her life so she has been keeping a big secret from her husband and her friends.

These three people (and Maggie) will form a circle of friendship that will help heal Anthony, teach Joy about the abundance of love and show Lulu how to find her true self.

I moved to a barrier island off of the coast of New Jersey when I was 12 so I fully understand the ebb and and flow of a place like Block Island. A small place goes from the smallish local population to the massive summer crowds. It’s pure craziness for 12 weeks and a few weekends on either side of Memorial and Labor Days.

Each character had a fully realized and unique story arc and they all intersected with each other. Ms. Mitchell Moore has created a insular world that is hardly touched by outside forces until Anthony’s publicist arrives looking for him then his mother arrives with his son, his father comes to the Island for a book reading and his wife arrives looking for their son. It’s like an invasion of reality followed by a freak storm that wreaks havoc on the island.

Another great book to add to this season’s list of beach reads. It flows along in a an easy fashion being told in the various voices of the women and men on the story. A visit to Block Island and its Islanders are just what any reader should enjoy this summer.