The Kept by James Scott – Blog Tour and Book Review

I received a free copy of The Kept from TLC Book Tours for my honest review. 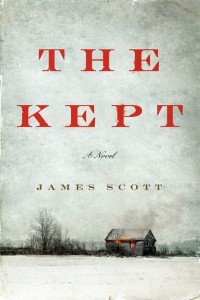 • Hardcover: 368 pages
• Publisher: Harper (January 7, 2014)
In the winter of 1897, Elspeth Howell treks across miles of snow and ice to the isolated farmstead in upstate New York where she and her husband have raised their five children. Her midwife’s salary is tucked into the toes of her boots, and her pack is full of gifts for her family. But as she crests the final hill, and sees her darkened house and a smokeless chimney, immediately she knows that an unthinkable crime has destroyed the life she so carefully built.
Her lone comfort is her twelve-year-old son, Caleb, who joins her in mourning the tragedy and planning its reprisal. Their long journey leads them to a rough-hewn lake town, defined by the violence both of its landscape and of its inhabitants. There Caleb is forced into a brutal adulthood, as he slowly discovers truths about his family he never suspected, and Elspeth must confront the terrible urges and unceasing temptations that have haunted her for years. Throughout it all, the love between mother and son serves as the only shield against a merciless world.
A scorching portrait of guilt and lost innocence, atonement and retribution, resilience and sacrifice, pregnant obsession and primal adolescence, The Kept is told with deep compassion and startling originality, and introduces James Scott as a major new literary voice.

James Scott was born in Boston and grew up in upstate New York. He holds a BA from Middlebury College and an MFA from Emerson College. His fiction has appeared in Ploughshares, One Story, American Short Fiction, and other publications. He lives in western Massachusetts with his wife and dog. The Kept is his first novel.
Find out more about James at his website.

This is going to be a hard one to review without giving out the secrets that are such an integral part of the novel. The Kept is a very dark story about Elspeth, a midwife who returns from a job to find her family brutally murdered. Only one son, Caleb survives; he witnessed the entire massacre and knows the faces of the killers. Elspeth and Caleb head off to find them to seek revenge but all is definitely not quite that cut and dry in this dark telling of murder, lies, secrets and redemption. The book is told in their two voices.

I cannot say that I liked the story; it was far too dark. Too evil. Too cold. In my efforts to stretch myself by reading books outside of my usual genres I truly pushed with this book and despite the effort it took to read I am happy that I did read it. It was not an easy read and I did not read it all at once. I read it in between two other books as I needed the bread from the intensity of the tale.

Mr. Scott writes a very intriguing character in Elspeth. She is not a good woman and that is made clear from the beginning. The reader is told from that start that she is a sinner. You just don’t understand the full extent of that statement until much later in the book. But you have developed a strong sympathy for her because no mother deserves to come home to a family dead in the snow.

This book is worth the read. It is not going to be a book for everyone and I’m sure I would not have gone near it 5 years ago. It probably deserves a second read as many books like this get better with the insights that foreknowledge of ending bring. Although the ending is really not as satisfying as I might have liked. As you can tell, I’m a bit torn on this one. So be it. I will state though, that the cover is one that draws you in and it is beautifully bound.

You can see The Kept Tour Schedule

You can purchase The Kept on Amazon.com

Disclosure: I received a free copy of The Kept from TLC Book Tours for my honest review. I received no compensation for this post.