The King’s Justice by E.M. Powell – Blog Tour and Book Review with a Giveaway

I am thrilled to be reading another book by E.M. Powell. The King’s Justice is the start of a new series featuring a pair of investigators in the time of Henry II. I was sent a copy at no charge for my honest review by Historical Fiction Virtual Book Tours. 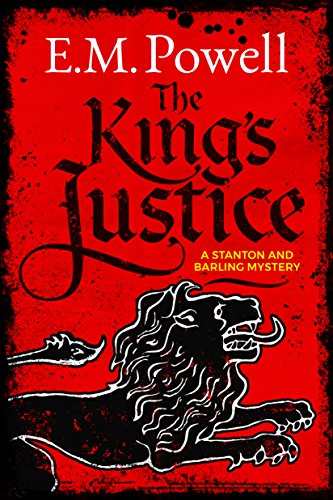 About The King’s Justice:

England, 1176. Aelred Barling, esteemed clerk to the justices of King Henry II, is dispatched from the royal court with his young assistant, Hugo Stanton, to investigate a brutal murder in a village outside York.

The case appears straightforward. A suspect is under lock and key in the local prison, and the angry villagers are demanding swift justice. But when more bodies are discovered, certainty turns to doubt—and amid the chaos it becomes clear that nobody is above suspicion.

Facing growing unrest in the village and the fury of the lord of the manor, Stanton and Barling find themselves drawn into a mystery that defies logic, pursuing a killer who evades capture at every turn.

Can they solve the riddle of who is preying upon the villagers? And can they do it without becoming prey themselves?

E.M. Powell’s historical thriller Fifth Knight novels have been #1 Amazon and Bild bestsellers. The King’s Justice is the first novel in her new Stanton and Barling medieval murder mystery series. She is a contributing editor to International Thriller Writers’ The Big Thrill magazine, blogs for English Historical Fiction Authors and is the social media manager for the Historical Novel Society.

Born and raised in the Republic of Ireland into the family of Michael Collins (the legendary revolutionary and founder of the Irish Free State), she now lives in North-West England with her husband, daughter and a Facebook-friendly dog.

The King’s Justice is not your usual historical fiction novel. It’s not about a specific historical event or famous person but rather it’s about the institution of the King’s justice. Henry II is known for many of the things he did during his reign – some of them more regrettable than others. I’m talking about oh, locking up his wife and that whole Thomas a Becket debacle. In spite of some of the worst of Henry he was also responsible for creating a system that brought the King’s justice out to his people through circuit courts and this system is the basis for the one we use today. He was a bit of a hothead but he believed in the laws. Part of the problem was the way the laws were applied as the Church was so tightly bound into the justice system. Innocence was not assumed and it’s discovery was incumbent upon passing a trial that basically lead to your death so innocent or guilty the end result was just bad for you.

Stanton is a character from Ms. Powell’s Fifth Knight trilogy, which I did read when it first came out several years ago. I have to be honest – I didn’t remember Hugo Stanton. There were many references back to him and his dead love which proved a touch frustrating because it was not fully explained. Perhaps it will be in the next book or it won’t be referred to as often. Often when books build upon past events the explanations are built into the story lines somehow but in this tale it left nothing but questions.

Stanton and Barling are two very distinct personalities and they don’t immediately click. Like any relationship they need to figure each other out and learn what the other can bring to the table. Barling is a very by the book kind of buy and Stanton is more of a man who goes by his gut. So you see where we have a classic pairing for the solving of crimes. Hopefully they will continue on administering the King’s justice.

I enjoyed the tale. The characters are intriguing and far from one note. The plot was full of twists and turns and I did not see the ending coming which is always a kick with a murder mystery. I will look forward to further adventures from these two.

During the Blog Tour we will be giving away 6 paperback copies of The King’s Justice! To enter, please enter via the Gleam form below.

– Giveaway ends at 11:59pm EST on July 13th. You must be 18 or older to enter.
– Giveaway is open INTERNATIONALLY.
– Only one entry per household.
– All giveaway entrants agree to be honest and not cheat the systems; any suspect of fraud is decided upon by blog/site owner and the sponsor, and entrants may be disqualified at our discretion.
– Winner has 48 hours to claim prize or new winner is chosen.