I received a free ecopy for my honest review. Any links to books are affiliate links. 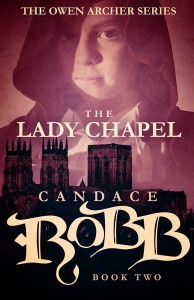 “A lovingly detailed background informs and animates the plot at every point.” —KIRKUS

Perfect for fans of both Ellis Peters and CJ Sansom, THE LADY CHAPEL is a vivid and immersive portrait of court intrigue and a testament to the power of the medieval guilds.

Summer in the year of our Lord 1365. On the night after the Corpus Christi procession, a man is brutally murdered on the steps of York Minster. The next morning his severed hand is found in a room at the York Tavern—a room hastily vacated by a fellow guild member who had quarreled with the victim.

Archbishop Thoresby calls on Owen Archer to investigate. As Owen tracks the fleeing merchant, he uncovers a conspiracy involving a powerful company of traders, but his only witness is a young boy who has gone into hiding, and his only suspect is a mysterious cloaked woman. When Owen discovers a link between the traders and a powerful coterie in the royal court, he brings his apothecary wife Lucie into the race to find the boy before he is silenced forever by the murderers.

.
Writing as Emma Campion, Candace has published two historical novels about the women of the English court in the 14th century, A Triple Knot and The King’s Mistress.
Born in the Blue Ridge Mountains of North Carolina, Candace grew up in Cincinnati, Ohio, and has lived most of her adult life in Seattle, Washington, which she loves for its combination of culture, natural beauty, and brooding weather so like Yorkshire, Wales, and Scotland, which she visits as often as possible. She has taught the art of writing the crime novel in the University of Washington’s certificate program, and offers workshops in writing the historical novel and in creating and plotting the crime series. Candace (and Emma) blog about writing and medieval topics at A Writer’s Retreat.

This is the second book in the Owen Archer series. The first, The Apothecary Rose introduced the reader to the main characters and set up our hero, Owen Archer as a 14th century  spy and solver of murders and mysteries. His wife Lucie is quite experienced with herbs and healing and the two of them make a great team.

In this novel murder is a foot or perhaps I should write at hand. A man is murdered and most of him is left on the steps of the York Minster but his hand is found elsewhere. Only one small boy knows who the murderer is and Owen and Lucie must do what they can to keep him safe before a similar fate befalls him. Following the clues takes Owen through the wool industry at the time.

As with the first book there are quite a few ancillary characters to get to know as Owen and Lucie work to solve the mystery of who killed the poor man on the Minster. The couple are also learning how to be married which makes for some challenges between them. But Owen has a very sharp mind and it’s fascinating to see him picking through the clues to come to the answer to solve the mystery.

I enjoyed this book as much as I did the first. The characters are familiar and you start to build on that familiarity. Ms. Robb brings 14th century England to life with her deep research and attention to detail.

There is a tour wide giveaway. All of the rules are on the Rafflecopter.