I received a free copy of The Lady’s Maid from TLC Book Tours for my honest opinion. 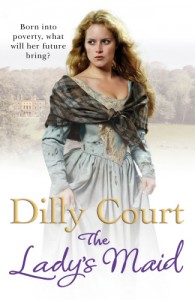 Arrow (July 9, 2012)
512 pages
In the quiet of a warm summer’s evening, two young mothers are forced to give up their babies. Whilst Kate grows up knowing only poverty and servitude, Josie’s world is one of privilege and luxury.
Despite the differences in their circumstances, Kate and Josie have been friends since childhood. But their past binds them together in ways they must never know.
Until a chance meeting forces Kate and Josie to confront the truth of that night nearly twenty years before – a truth that turns both worlds upside down and threatens to destroy their friendship forever…

Dilly Court grew up in North-east London and began her career in television, writing scripts for commercials. She is married with two grown-up children and four grandchildren, and now lives in Dorset on the beautiful Jurassic Coast with her husband.
Dilly is a Sunday Times Top Ten bestselling author in the UK, where she has sold over a million books to date. Her books have this year been released for the first time as ebooks in the United States. Print and e-editions are available in Canada and Australia.

I was so looking forward to this book after having read The Best of Daughters. I do thoroughly enjoy Ms. Court’s writing style and her magical way of working the most mundane of the workaday into a scene. She makes churning butter and collecting the eggs seem like fun. I was just not as enamored of one of the heroines in this tale – she had little to redeem her and even as she “grew” she grew too little. It’s hard to fall in love with a book when you cringe every time a main character makes an appearance or opens her mouth.

Two baby girls are born within hours of each other and both are given away. One was born to a gypsy girl who had a one night stand with a boy she should not have and the other was born to an upper class woman who died in childbirth. The gypsy baby goes to a rich family to be raised in comfort and the other to a poor family. This is a book all about the distinctions and separations between the classes in mid-19th century England. While the two girls, Kate and Josie become friends – Josie never lets Kate forget that she is a maid. A lower class girl, a servant.

It’s the character of Josie that so grated on my nerves. She is obnoxious and uncaring. Even when her actions hurt others – physically or emotionally – she doesn’t change. It’s all for Josie or nothing. Even to the last page of the novel she was hellbent on what she wanted and that was that. There was perhaps a bit of softening but not enough to make me care enough about her. Kate was her direct opposite and she was what kept me reading until the end. I so wanted it all to work out for her and I don’t understand why she put up with Josie’s mistreatment for as long as she did. But some manner of tension is necessary in a book…

The romances were very well written and both “heroes” were the kind a reader wants in a romance novel. Harry and Sam are well suited to their respective women and they understand their quirks and personalities. I won’t give up on Dilly Court because of this one character, that would be foolish. I still enjoyed the bulk of this book. But a dislike formed that early on is hard to drop and I just never came around to Josie – I guess Kate is a better woman….

You can see the Dilly Court Tour Schedule

You can read excerpts of: The Best of Daughters   The Lady’s Maid

You can read my review of The Best of Daughters

Disclosure:  I received a free copy of The Lady’s Maid from TLC Book Tours for my honest opinion.  I received no other compensation for this post.