I had been reading good things about The Lighthouse Keeper’s Daughter by Hazel Gaynor so I was very thrilled when TLC Book Tours offered me the opportunity to review it. I was sent a copy at no charge for my honest review. 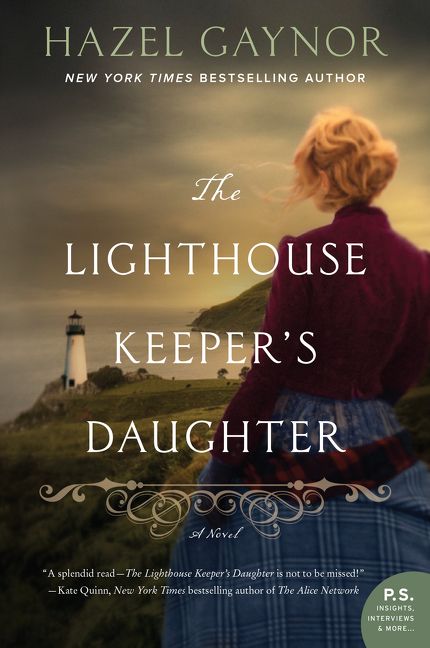 About The Lighthouse Keeper’s Daughter:

From The New York Times bestselling author of The Girl Who Came Home comes a historical novel inspired by true events, and the extraordinary female lighthouse keepers of the past two hundred years.

“They call me a heroine, but I am not deserving of such accolades. I am just an ordinary young woman who did her duty.”

1838: Northumberland, England. Longstone Lighthouse on the Farne Islands has been Grace Darling’s home for all of her twenty-two years. When she and her father rescue shipwreck survivors in a furious storm, Grace becomes celebrated throughout England, the subject of poems, ballads, and plays. But far more precious than her unsought fame is the friendship that develops between Grace and a visiting artist. Just as George Emmerson captures Grace with his brushes, she in turn captures his heart.

1938: Newport, Rhode Island. Nineteen-years-old and pregnant, Matilda Emmerson has been sent away from Ireland in disgrace. She is to stay with Harriet, a reclusive relative and assistant lighthouse keeper, until her baby is born. A discarded, half-finished portrait opens a window into Matilda’s family history. As a deadly hurricane approaches, two women, living a century apart, will be linked forever by their instinctive acts of courage and love.

The Lighthouse Keeper’s Daughter is available at Harper Collins

HAZEL GAYNOR is the New York Times and USA Today bestselling author of A Memory of Violets and The Girl Who Came Home, for which she received the 2015 RNA Historical Novel of the Year award. Her third novel, The Girl from the Savoy, was an Irish Times and Globe & Mail Canada bestseller, and was shortlisted for the BGE Irish Book Awards Popular Fiction Book of the Year. In 2017, she has published The Cottingley Secret and Last Christmas in Paris. Hazel was selected by US Library Journal as one of ‘Ten Big Breakout Authors’ for 2015 and her work has been translated into several languages. Hazel lives in Ireland with her husband and two children.

I knew nothing about the true story at the heart of this tale. I did turn to the google to learn about the woman who inspired one half of the book. This is what I love about reading – learning about people and events that may not have changed world history but had great impact for the people involved.

There are two distinct stories; in 1838 off of England Grace Darling (that was her real name!) lives with her family in a lighthouse when one night there is a shipwreck. Even though conditions are treacherous she goes out with her father to try an rescue as many people as they can. Their success in doing so leads to her becoming a minor celebrity in her time. She does not really welcome the attention – she just wants to live her life quietly on the island, tending the lighthouse.

In the second story, Matilda is being sent away to Rhode Island into the care of a distant aunt who is a lighthouse keeper. She finds herself pregnant out of wedlock and this is just not acceptable. She is to give birth, leave the baby and return.

Matilda is not sure what to expect when she arrives but what she finds is so much more that she ever could have expected. It is not a warm welcome but as she gets used to a life so alien to what she had known she starts to learn old family history which leads her to Grace.

These two women have far more in common than they could ever imagine and as Matilda learns more about Grace which leads to her learning about herself.

This is a book that wraps itself around you and doesn’t let go. Ms. Gaynor creates such atmosphere in describing her worlds that it’s a bit disconcerting when you put down the book and you come to the realization that you are not on an island caring for a lighthouse.  The characters are so well drawn as to pull you into their lives and share the small details that make the difference between reading a book and becoming immersed in a world.