I keep saying that I am not going to read any more WWII books and then I go and accept another WWII book for review. So I guess I just can’t trust myself when it comes to a good synopsis. I thank Thanks TLC Book Tours for sending me a copy of The London Restoration at no charge for my honest review. 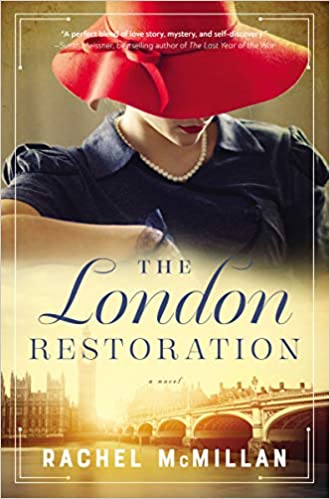 About The London Restoration:

Determined to save their marriage and the city they love, two people divided by World War II’s secrets rebuild their lives, their love, and their world.

London, Fall 1945. Architectural historian Diana Somerville’s experience as a codebreaker at Bletchley Park and her knowledge of London’s churches intersect in MI6’s pursuit of a Russian agent named Eternity. Diana wants nothing more than to begin again with her husband Brent after their separation during the war, but her signing of the Official Secrets Act keeps him at a distance.

Brent Somerville, professor of theology at King’s College, hopes aiding his wife with her church consultations will help him better understand why she disappeared when he needed her most. But he must find a way to reconcile his traumatic experiences as a stretcher bearer on the European front with her obvious lies about her wartime activities and whereabouts.

Featuring a timeless love story bolstered by flashbacks and the excavation of a priceless Roman artifact, The London Restoration is a richly atmospheric look at post-war London as two people changed by war rebuild amidst the city’s reconstruction.

Rachel McMillan is the author of the Herringford and Watts mysteries, the Three Quarter Time series of contemporary romances set in opulent Vienna, and the Van Buren and DeLuca mysteries praised for bringing an authentic 1930’s Boston world to life while normalizing the fictional conversation surrounding mental illness. Her first work of non-fiction, described as a romantic’s guide to independent travel, releases in 2020. Rachel lives in Toronto, Canada.

I was drawn to this book by the heroine’s interest in the old churches of London. She had a passion for their architecture, their history and their quirks. Diana came to this love through her father who owned a book store. It was through her fascination for these houses of worship that Diana meets her husband Brent, a professor of theology. They marry but almost as soon as they do Brent is off serving as a stretcher bearer in France while Diana is recruited to a secret division of the War Office to help with decriptions and the like. It’s because of her facility with languages and her bright intelligence that she finds herself as a sort of civilian spy.

Brent is wounded in the war and he waits for Diana in London after it is over but she is in Vienna helping seek out a communist spy. After 5 weeks she finally joins him but they are both keeping secrets; his about how he was injured, hers about what she has been doing during the war. Can they find their way to each other after so much has come between them?

This was a really complex and compelling book – from the focus on the restoration of the churches in London to the restoration of some semblence of normalcy in a post war society to the restoration of a marriage. The author keeps you riveted to the various subplots and weaves them all together with a very satisfying ending. The relationship between Diana and Brent was realistic and at times heartbreaking as they work towards finding each other after all that happened since they met.

I also appreciated the author’s extensive note at the start of the book. It was a nice set up going into the novel. I didn’t quite finish this in one day as it’s harvest season but I suspect that had I been able to just read I would have. It’s a page turner!