The Longest Silence by Debra Webb – Book Spotlight and Excerpt

I am very pleased to host an special numbered excerpt stop and spotlight for The Longest Silence by Debra Webb, now touring with TLC Book Tours.

Follow along the excerpt tour beginning in mid February, with long excerpts in consecutive order at each tour stop, followed by a review tour beginning March 5th, release week! 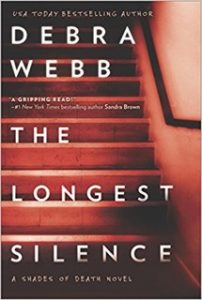 It was late, but the tension in the chief of police’s office was motivated by far more than the hour. Tony sensed the animosity the moment he walked through the entrance doors of the Public Safety building. Obviously, the man already had Tony’s number. Not surprising. Any cop worth his salt would do his homework. There was a time when Tony had been damned good at prompting all the right reactions.

Since it was well past business hours, a uniformed officer had been waiting to allow him into the one-story building and then to escort him to the office of the town’s top cop. A tall, fit man, Chief Arlan Phelps had no doubt spent the last thirty or so years in law enforcement and possessed no tolerance for those who used evasion and innuendo to manipulate events. Not so good for Tony since these days those were his most valuable asset.

“Make yourself comfortable, Agent LeDoux.” Phelps gestured to the chair in front of his desk. “Thanks.” Tony settled into the offered seat, careful to keep his gaze on the chief. He’d pulled over at a truck stop outside Atlanta. After topping off the gas tank, he’d spent some time in the bathroom shaving and changing clothes. Then he’d forced himself to eat a hot meal. He’d used some Visine to tone down his bloodshot eyes and popped a couple of Advil. By the time he made the exit for Milledgeville some ninety
miles later he felt reasonably human. Phelps hadn’t stopped staring at him since he came into the room. The older man smoothed a palm over his slick head. “There is nothing in this world I hate more than having my time wasted, and you, Mr. LeDoux, wasted a good deal of my time this afternoon.”

So, he knew Tony’s secret. Great. Might as well play this out and see if there was anything salvageable. “How do you mean, Chief? When a young woman—anyone for that matter—goes missing, I take it very seriously, and time is not an asset that should ever be wasted in a situation such as this one.” “The FBI tells me you’re no longer in their service.” Phelps leaned back in his chair and rested his hands on its worn, smooth wooden arms. “I don’t know what to make of that, Mr. LeDoux. Isn’t it against the law to impersonate a federal agent?”

Now he was just being an asshole. Tony nodded. “You’re right. I used the position I once held to prompt you to action. The truth is Tiffany is my niece—my only niece, daughter of my only sister. My goal is to ensure everything possible is done to find her.” He held up a hand when Phelps would have spoken. “I no longer serve the Bureau, that’s true, but I did and I was very good at my job. I can help—I want—to help.” Phelps smiled. “I figured as much after I spoke with the girl’s parents.

Here’s the problem.” He leaned forward, eliciting a groan from his chair. “We have no real proof at this time that Tiffany Durand is missing. She’s nineteen years old and even her roommate said she might just have decided to take a little vacation with the new guy she’s seeing and hasn’t made it back to class in time. It happens. It’s too early to get worried just yet.”

Tony prepared to list the litany of reasons that assessment was inaccurate except this time Phelps was the one holding up his hand. So Tony grabbed onto his last shred of patience and heard the man out. “I make my decision based on facts and the facts simply don’t indicate foul play just yet. I don’t know how well you keep up with your niece, but this isn’t the first time she’s disappeared. Campus security is lead on any case that involves the students and they’ve questioned her roommate and several of her friends—just because her parents called. I spoke with the chief over there—for no other reason than you asked me to do so. As you know, without some indication of foul play or suggestion of imminent danger, Tiffany is not technically missing. She’s a nineteen-year- old woman who didn’t show up for class and who has a record of doing so. The good news is she always comes back. Never misses more than a day or two.”

When the chief paused to take a breath, Tony argued, “We believe this time is different. Tiffany’s mother knows her better than anyone and she has reason—” “Mr. and Mrs. Durand explained their feelings very clearly and we all completely understand their misgivings. Hell, I have two daughters and raising them about put me six feet under. Girls, no matter how smart and how sweet, can break your heart and scare you half to death.” Tony took a moment as if he were weighing the chief’s sage words.

“So, you’re choosing to impose a waiting period?”

Be sure to check out The Longest Silence Tour Schedule for additional excerpts, reviews and giveaways.

About The Longest Silence:

“The twists and turns in this dark, taut drama make it both creepy and compelling.” —New York Times bestselling author Steve Berry

Joanna Guthrie was free. She had been for eighteen years–or so she needed everyone to believe. What really happened during the longest fourteen days of her life, when she and two other women were held captive by the worst kind of serial killer, wasn’t something she could talk about. Not after what they had to do to survive.

But when more women go missing in an eerily similar manner, Jo knows her prolonged silence will only seal their fates. She’s finally ready to talk; she just needs someone to listen. FBI special agent Tony LeDoux can’t deny he finds Jo compelling–he’s just not sure he believes her story. But with the clock ticking, Jo will do anything to convince him, even if it means unearthing long-buried secrets that will land them squarely in the crosshairs of the killer…

ALL AMAZON PURCHASE LINKS ARE AFFILIATE LINKS. IF YOU MAKE A PURCHASE I RECEIVE A SMALL COMMISSION (AT NO ADDITIONAL CHARGE TO YOU)

DEBRA WEBB is the award winning, USA Today bestselling author of more than 130 novels, including reader favorites the Faces of Evil, the Colby Agency, and the Shades of Death series. With more than four million books sold in numerous languages and countries, Debra’s love of storytelling goes back to her childhood on a farm in Alabama.