I thoroughly enjoyed Another Woman’s Husband by Gill Paul so when TLC Book Tours offered me a copy of her latest book, The Lost Daughter at no charge for my honest review I said yes immediately. 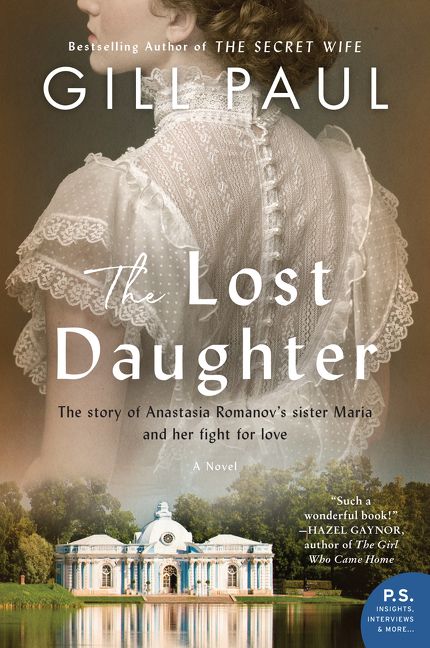 About The Lost Daughter:

If you loved I Am Anastasia by Ariel Lawhon you won’t want to miss this novel about her sister, Grand Duchess Maria. What really happened to this lost Romanov daughter? A new novel perfect for anyone curious about Anastasia, Maria, and the other lost Romanov daughters, by the author of The Secret Wife.

1918: Pretty, vivacious Grand Duchess Maria Romanov, the nineteen-year-old daughter of the fallen Tsar Nicholas II, lives with her family in suffocating isolation, a far cry from their once-glittering royal household. Her days are a combination of endless boredom and paralyzing fear; her only respite are clandestine flirtations with a few of the guards imprisoning the family—never realizing her innocent actions could mean the difference between life and death

1973: When Val Doyle hears her father’s end-of-life confession, “I didn’t want to kill her,” she’s stunned. So, she begins a search for the truth—about his words and her past. The clues she discovers are baffling—a jewel-encrusted box that won’t open and a camera with its film intact. What she finds out pulls Val into one of the world’s greatest mysteries—what truly happened to the Grand Duchess Maria?

You can purchase The Lost Daughter at Harper Collins

Gill Paul is an author of historical fiction, specializing in relatively recent history. She has written two novels about the last Russian royal family: The Secret Wife, published in 2016, which tells the story of cavalry officer Dmitri Malama and Grand Duchess Tatiana, the second daughter of Russia’s last tsar; and The Lost Daughter, published in October 2018, that tells of the attachment Grand Duchess Maria formed with a guard in the house in Ekaterinburg where the family was held from April to July 1918.

Gill’s other novels include Another Woman’s Husband, about links you may not have been aware of between Wallis Simpson, later Duchess of Windsor, and Diana, Princess of Wales; Women and Children First, about a young steward who works on the Titanic; The Affair, set in Rome in 1961–62 as Elizabeth Taylor and Richard Burton fall in love while making Cleopatra; and No Place for a Lady, about two Victorian sisters who travel out to the Crimean War of 1854–56 and face challenges beyond anything they could have imagined.

Tales of the Romanovs always tend to fascinate but mostly tend to remind the reader of the horrors of that time in history for the last Russian Tsar and his family. The Lost Daughter is the third book I have read by Ms. Gill and the second in which she offers an alternative ending for one of the Romanov daughters. It’s certainly wonderful to dream of a different finish for these young ladies as the sins of the father are often felt by the children.

This book is told in two time periods as so many books today are wont to be; the historical sections are in the early 20th century when the Romanov family was under house arrest in Ekaterinburg. Maria is just entering her teens and doesn’t understand the whys of their forced stay in a place that is so different from what she knew. She is a vivacious, outgoing girl and dreams only of walking outside, being free and marrying and having children some day. She is friendly with the men guarding them and innocently flirtatious. Some guards don’t understand her overtures and others feel for her.

In the more modern era of the 1970s a young married woman named Val is suffering in an abusive marriage. She learns her father – who was also abusive – is dying. He keeps calling out in his delirium that he didn’t want to shoot her and the nurses are concerned. Val goes to visit him behind her husband’s back and has no clue what he means but feels it’s just ravings. After his death she learns so much of his history that she did not know and it shocks her.

As Val pursues her father’s past it crosses with the last days of the Romanovs.

Sometimes a What If? story is just the thing. There is a sad romance about the Romanovs so the thought that one or more of them actually might have survived is dreamy concept. Ms Paul does a very convincing job in her tale of this lost daughter. As is usual with this dual timeline books I was more invested in the historical story than the more modern one but of course, one drives the other.

Once I got into this book I couldn’t put it down. The family drama on Val’s side and the ultimate family story on Maria’s side were both very compelling. The description of the deprivations during WWII in Russia were horrifying. Ms. Gill brought all of the time periods to vivid life – whether good or bad. Her writing brings you into the story to experience it with the characters. It’s one of those books where I felt like I was watching a movie in my head rather than reading a book. The words just formed the pictures so easily. It’s at times a very sad book but at others a very hopeful book.