I am enjoying books about Alexander Hamilton. I have also thoroughly enjoyed the movie of the play that I have watched or should I write listened to ad nauseum as I have chopped vegetables as the harvest has come in. In November I have several books about his life on my reading schedule and I was quite happy to accept a copy of The Lost Diary of Alexander Hamilton by Sophie Schiller from Historical Fiction Virtual Book Tours at no charge for my honest review. 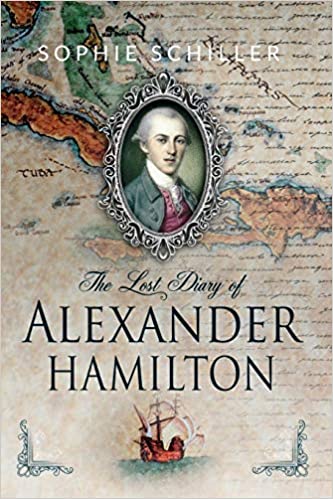 About The Lost Diary of Alexander Hamilton:

The story of Alexander Hamilton’s lost childhood in the Caribbean—a land of sugar plantations and slavery—where an impoverished orphan must learn to survive despite impossible odds. It is a story of struggle, heartbreak, resilience, and ultimately, triumph.

1765. Alexander Hamilton arrives in St. Croix with his family to begin a new life. He longs for the chance to go to school and fit in, but secrets from his mother’s past threaten to tear his family apart. When he sees a young African slave being tortured, Alexander vows to act. He urges his uncle to buy Ajax and promises to set him free. But tragedy strikes when his father abandons the family and his mother dies of yellow fever. Orphaned and alone, Alex is forced to survive by his wits and resourcefulness. By day he works in a counting house learning the secrets of foreign trade. By night he studies Plutarch and dreams of fame and glory. When Ajax is sold to a brutal planter, Alex vows to save him, even at the risk of his own life. With the aid of a reluctant slave-catcher, he concocts a plan to rescue Ajax, but when the price for helping a slave run away is torture or death, no one is safe.

In this gripping tale, Sophie Schiller re-creates the boyhood of the young man who would grow up to become a Founding Father and one of America’s foremost men.

Sophie Schiller was born in Paterson, NJ and grew up in the West Indies. She is a novelist and a poet. She loves stories that carry the reader back in time to exotic and far-flung locations. Kirkus Reviews has called her “an accomplished thriller and historical adventure writer.” Her novel, ISLAND ON FIRE was published by Kindle Scout in 2018 and was called, “A memorable romantic thriller” by Publishers Weekly. Her latest novel, THE LOST DIARY OF ALEXANDER HAMILTON, is out now. She graduated from American University, Washington, DC and lives in Brooklyn, NY.

This novel shares the early life of Alexander Hamiliton, who has become quite popular due to a certain play and the subsequent movie made from it.  As anyone who has seen said play can tell you Mr. Hamilton was an immigrant and in reading The Lost Diary of Alexander Hamilton we learn of his life on St. Croix. From his mother’s desire that he not become a planter to his father’s less than stable presence in his life. His family life was complex and complicated but Alexander grew up sure at least of his mother’s love.

I didn’t know when I started reading that this was a YA book. The knowledge didn’t change or detract from my enjoyment of the book; it was a fast and diverting read that shares the early years of the man who is currently America’s favorite founding father. There is also a side plot about Alexander saving a young slave from a horrible master.

The author’s note was of particular interest in sharing that but for the tenaciousness of one woman the story of Alexander’s mother would be lost as he was embarrassed as to his beginnings. It was a time where parentage and lineage mattered and he did all he could to recreate himself and rise above his station. But someone wanted to make sure that his history was recorded and for that history is pleased.

Each book I read on Mr. Hamilton teaches me a little bit more about this highly intelligent and fascinating man. This book recreates the boy who became the man in an easy to read and entertaining way.

During the Blog Tour, we are giving away a paperback copy of The Lost Diary of Alexander Hamilton + a $10 Amazon Gift Card to one lucky winner! To enter, please use the Gleam form below.

The giveaway is open to US residents only and ends on September 19th. You must be 18 or older to enter.

The Lost Diary of Alexander Hamilton 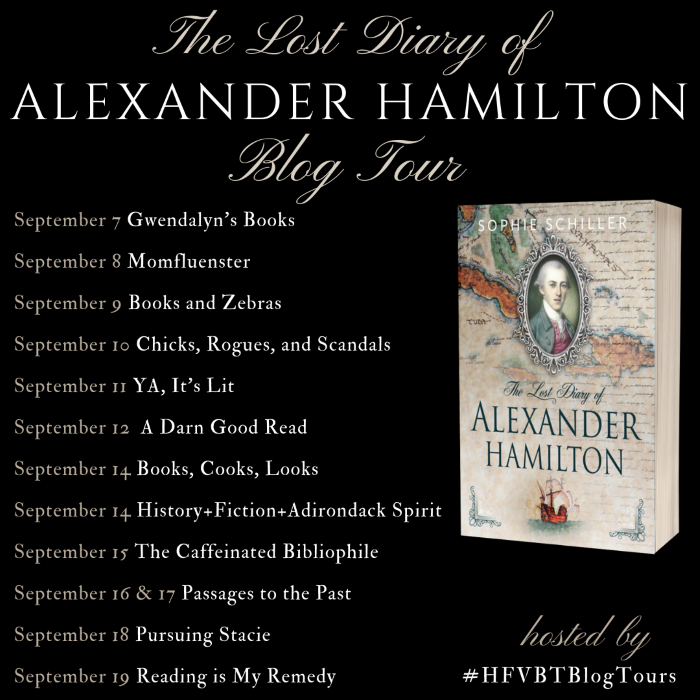