The Lost Girls of Devon is the third book I have read by Barbara O’Neal. I enjoyed last year’s When We Believed in Mermaids and in 2018 I read The Art of Inheriting Secrets. I thank TLC Book Tours for sending me a copy at no charge for my honest review. 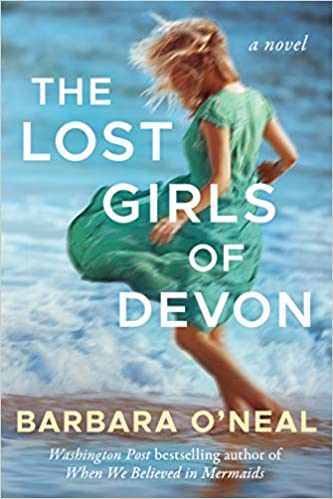 About The Lost Girls of Devon:

It’s been years since Zoe Fairchild has been to the small Devon village of her birth, but the wounds she suffered there still ache. When she learns that her old friend and grandmother’s caretaker has gone missing, Zoe and her fifteen-year-old daughter return to England to help.

Zoe dreads seeing her estranged mother, who left when Zoe was seven to travel the world. As the four generations of women reunite, the emotional pain of the past is awakened. And to complicate matters further, Zoe must also confront the ex-boyfriend she betrayed many years before.

Anxieties spike when tragedy befalls another woman in the village. As the mystery turns more sinister, new grief melds with old betrayal. Now the four Fairchild women will be tested in ways they couldn’t imagine as they contend with dangers within and without, desperate to heal themselves and their relationships with each other.

Barbara O’Neal is the author of twelve novels of women’s fiction, including The Art of Inheriting Secrets, How to Bake a Perfect Life, and The All You Can Dream Buffet. Her award-winning books have been published in more than a dozen countries, including France, England, Poland, Australia, Turkey, Italy, Germany, and Brazil. She lives in the beautiful city of Colorado Springs with her beloved, a British endurance athlete who vows he’ll never lose his accent.

The Lost Girls of Devon is the story of four generations of women, all of whom are suffering in one way or another. Zoe lives with her daughter Isabel in the States.  Zoe’s mother Poppy and her grandmother Lillian live in Devon, England. Zoe grew up in Devon and her best friend is still there but she has gone missing and Zoe heads to England to see if she can find out what is going on. Also, her grandmother is getting frail and is showing signs of dementia. There are a lot of ghosts for her in Devon, including her old boyfriend.

Zoe is hoping that the change of scenery will help Isabel who has experienced a trauma but she refuses to discuss it. She hopes that getting her away from her everyday environment will help her.

There is a lot going on in this book; from the broken family relationships, dementia, the missing friend, Isabel’s cyber bullying, missing girls and mysterious boyfriends. To me, there is not enough book to fully develop all of the subplots. They are all given their due on the lead in but some are not fully resolved. I had a few questions at the end and it was just a titch frustrating.

I was frustrated by many of the characters in this book, mostly Zoe. I particulary liked Poppy and wished her character had been better developed. Her reasons for leaving didn’t make sense to me but I don’t have anything to compare to in my life experience. I guess I think the book was trying to cover too many topics.

One lucky US reader will win a copy of The Lost Girls of Devon. Just enter as many ways as you would like on the Gleam widget below. Full rules are on the widget. Good luck everyone.
barbara samuels