I believe this is my fourth book by Rachel Hauck. I enjoy her sweet stories and I am glad that TLC Book Tours sent me a copy of The Love Letter at no charge for my honest review. 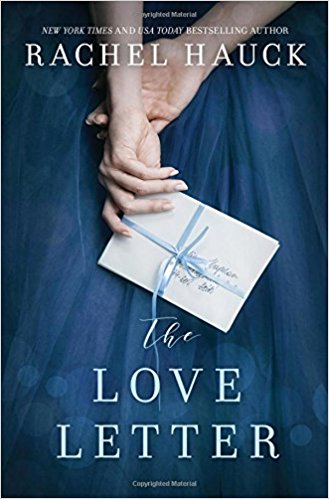 About The Love Letter:

From the New York Times bestselling author of The Wedding Dress comes a story of long-lost love and its redemption in future generations.

Romance has never been actress Chloe Daschle’s forte—in life or on screen. But everyone knows who to call for a convincing death scene . . . and it might be killing her career.

When Chloe is given a peek at the script for an epic love story, she decides to take her destiny into her own hands and request an audition for the lead female role, Esther Kingsley. The compelling tale, inspired by family lore and a one-page letter from the colonial ancestor of scriptwriter Jesse Gates, just might break her out of this career-crippling rut. Jesse would rather write about romance than live through it after his past relationship ended in disaster. But once on-set together, the chemistry between Jesse and his leading lady is hard to deny.

Centuries earlier, in the heart of the Revolutionary War, Hamilton Lightfoot and Esther Longfellow wrote their saga off the silver screen. Esther’s Loyalist father opposes any relationship with Hamilton, but Esther must face her beloved father’s disapproval and the dangers of war in order to convince Hamilton of their future together. Hamilton has loved Esther for years, and on the eve of battle pens the love letter she’s always wanted—something straight from the heart.

Set in stunning upcountry South Carolina, The Love Letter is a beautifully-crafted story of the courage it takes to face down fear and chase after love, even in the darkest of times. And just maybe, all these generations later, love can come home in a way not even Hollywood could imagine.

Rachel Hauck is the New York Times, Wall Street Journal, and USA TODAY bestselling author of The Wedding Dress, which was also named Inspirational Novel of the Year by Romantic Times and was a RITA finalist. Rachel lives in central Florida with her husband and pet and writes from her ivory tower.

Check out my reviews on other books by Rachel Hauck: THE WRITING DESK, THE WEDDING DRESS, THE WEDDING SHOP, THE SWEET BY AND BY WITH SARA EVANS

The charm of a Rachel Hauck book lies in the familiarity; the look to the past where a love does not quite go as it should. The move to the present where the two that we all know belong together either haven’t met yet or are denying their attraction. And the item – the dress, the desk, or in this case – the letter – that brings them together.  I personally love the mix of contemporary and historical fiction that the author weaves together so well.

Esther Longfellow is the daughter of a wealthy (if slightly troubled) loyalist to the Crown. She has just returned from her Season in London – her mother insisted but Esther loves South Carolina and didn’t want to remain. She also loves Hamilton Lightfoot, the nephew of the neighboring farm owner and a man who commits to the American cause. Their story drives the historical half of the book.

Chloe Daschle is the daughter of Hollywood royalty looking for the role that will make her career. Jesse Gates is a first time screenwriter who has produced a script that has attracted attention and is going to be directed by a friend of Chloe’s father so she begs an audition. She feels this will be the part she needs to explode her career. She meets Jesse at a friend’s wedding and there is an immediate spark between them – but neither one of them is looking for a relationship.

The chapters bounce between the four main characters slowly rolling out the story of Esther and Hamilton’s love and Chloe and Jesse’s attraction. You’ll just have to read the book to see if one or both couples succeed and what happens to them.

I did enjoy this book, as I enjoyed Ms. Hauck’s other novels. The mix of past and present is something I do enjoy and as is par for the course with me I did enjoy Esther and Hamilton’s story more but that is because I always tend to like the historical tales more than the contemporary ones. Each one though makes for very good reading. I read the book in one afternoon and it made for a lovely way to spend the day. I will look forward to the next book from Ms. Hauck to see where in the past she chooses to go.

There will be a giveaway for The Love Letter on the Thomas Nelson Instagram page: @tnzfiction