I was very happy to accept a copy of The Moon Sister by Lucinda Riley from the publisher at no charge for my honest review. 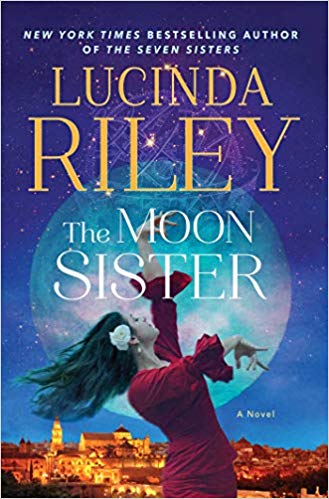 About The Moon Sister:

Tiggy D’Aplièse spends her days experiencing the raw beauty of the Scottish Highlands doing a job she loves at a deer sanctuary. But when the sanctuary is forced to close, she is offered a job as a wildlife consultant on the vast and isolated estate of the elusive and troubled laird, Charlie Kinnaird. She has no idea that the move will not only irrevocably alter her future, but also bring her face-to-face with her past.

At the estate, she meets Chilly, a gypsy who fled from Spain seventy years before. He tells her that not only does she possess a sixth sense passed down from her ancestors, but it was foretold long ago that he would be the one to send her back home…

In 1912, in the poor gypsy community outside the city walls of Granada, Lucía Amaya-Albaycin is born. Destined to be the greatest flamenco dancer of her generation—and named La Candela, due to the inner flame that burns through her when she dances— Lucía is whisked away by her ambitious and talented guitarist father at the tender age of ten to dance in the flamenco bars of Barcelona. Her mother is devastated by the loss of her daughter and as civil war threatens in Spain, tragedy strikes the rest of her family. Now in Madrid, Lucía and her troupe of dancers are forced to flee for their lives, their journey taking them far across the water to South America and eventually, to North America and New York—Lucía’s long-held dream. But to pursue it, she must choose between her passion for her career and the man she adores.

Lucinda Riley is the New York Times bestselling author of over twenty novels, including The Orchid House, The Girl on the Cliff, and the Seven Sisters series. Her books have sold more than thirteen million copies in over thirty languages globally. She was born in Ireland and divides her time between England and West Cork with her husband and four children. Visit her online at LucindaRiley.com.

The Moon Sister is the fifth installment in the “sisters” series from Ms. Riley. I’ve only had the opportunity to read one other book – The Storm Sister. She writes the books so that they can stand alone so do not worry that you have to read from the start. Anything you need to know to understand what is going on is skillfully woven into the story at hand. The basic premise is that a man adopted 6 babies from around the world, naming them after the stars in the Pleiades, a constellation known as the Seven Sisters. This book is about Teygeta called Tiggy.

Tiggy has accepted a job to work with Scottish wildcats on a remote estate with (of course) a handsome laird. He is married but things are not (of course) going well in the marriage. Tiggy settles in and gets her feline charges settled as well. Then she goes about doing her thing which other than feeding the cats every day was not much. She does develop relationships with the various inhabitants around the property including a mysterious man named Chilly who has second sight. He has told her that he knew she was coming and that soon she would leave to go home to the place of her birth to meet her family.

This leads to Chilly sharing with Tiggy the story of her grandmother, a famous Flamenco dancer from Spain. As things fall apart on the estate – some jealousy, and other things that to me were never fully explained  – Tiggy heads off to face her past to find her future just as her adoptive father wanted her to do.

In Spain she literally walks right into the place she needs to be to find her answers. While necessary it was all rather facile in service to the plot. There Tiggy learns the rest of the story about her grandmother and then her mother and father.  She also finds out about herself and the powers that she holds that have come down to her through time.

So, did I like this book? It was certainly easy to read. I read it in one long day. It was a pretty book if I can use that work; it took place in beautiful settings that Ms. Riley knew how to write to bring to life for her reader. I felt like I was on that glorious estate in Scotland, basking in the sun in Granada or experiencing life on a private island. The problem was how easy it all seemed for everyone despite lack of money in some cases, war in others. There was minimal conflict and that which was there was somewhat easily resolved.

Reading The Moon Sister made for a diverting Saturday. I had the time so I sat and read it through. I am not sure that had I started it without the firm block of time that I would have read it in one sitting like this. It wasn’t that compelling, it was certainly interesting.