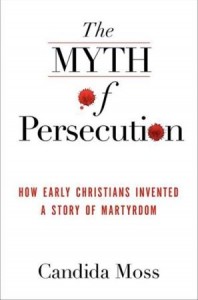 • Hardcover: 320 pages
• Publisher: HarperOne (March 5, 2013)
According to Cherished Church tradition and popular belief, before the Emperor Constantine made Christianity legal in the fourth century, early Christians were systematically persecuted by a brutal Roman Empire intent on their destruction. As the story goes, vast numbers of believers were thrown to the lions, tortured, or burned alive because they refused to renounce Christ. These saints, Christianity’s inspirational heroes, are still venerated today.
In The Myth of Persecution, Candida Moss reveals that the “Age of Martyrs” is a fiction—there was no sustained three-hundred-year-long effort by the Romans to persecute Christians. Instead, these stories were pious exaggerations; highly stylized rewritings of Jewish, Greek, and Roman noble death traditions; and even forgeries designed to marginalize heretics, inspire the faithful, and fund churches.
The traditional story of persecution is still taught in Sunday school classes, celebrated in sermons, and employed by church leaders, politicians, and media pundits who insist that Christians were—and always will be—persecuted by a hostile, secular world. Moss urges modern Christians to abandon the conspiratorial assumption that the world is out to destroy the church and, rather, embrace the consolation, moral instruction, and spiritual guidance that these martyrdom stories provide.

Candida Moss is professor of New Testament and Early Christianity at the University of Notre Dame. A graduate of Oxford University, she earned her doctorate from Yale University. A frequent contributor to the National Geographic Channel, Moss is the award-winning author of several scholarly works on martyrdom, including The Other Christs and Ancient Christian Martyrdom. She lives in South Bend, Indiana.
Visit Moss at her website, connect with her on Facebook, and follow her on Twitter.

I am by no means any manner of religious/Biblical expert. I do have a fascination for the study of religions and their histories. I was baptized Catholic and for my first 6 years of school I had a Catholic education. My commentary on this book might offend some but religion is one of those divisive topics.

I found Ms. Moss’s writing style to be very easy to read and the book was well laid out. I especially found the section on the etymology of the word martyr to be fascinating. I love learning how words come to mean what they do.

Many of the stories of the martyrs were part of my religious education at school; we were all taught of the glory of dying for your belief in God. Instant ride to heaven, that! In fact I still remember the fear – I grew up in Philadelphia in a time when the city was having crime issues and “motorcycle gangs” (according to the nuns anyway) were running rampant. If one of these evil types were to invade the school and ask us to renounce our God we were to die rather than do so. I’m not kidding. This is what went through the nuns’ heads and what they passed on to us. I only went through sixth grade so I could not have been that old. And people wonder why I have no religion….

Although the above anecdote does prove the power of the martyr legend. But back to the book. Ms. Moss goes through the history of Christianity and of the more famous martyrs. The facts are presented in a straightforward manner with her various positions in support of her topic. I found it fascinating. To me organized religion is more about consolidation of power than anything else so I would expect that the Romans or any other power base would see a growing “cult” as a threat. As that threat grew into the largest power base in the known world one could understand why the Romans might have been nervous.

The power struggles continued as the church broke with the East and then the Reformation. Everyone’s God was “the one true God.” Persecution of Christians became persecution of the opposition’s power base. But without the martyr aspect dying for one’s God was not as motivating as dying for power.

That’s not to say that religious persecution has not/does not exist. But this book is about Christianity. For someone like me who is a casual reader of religious history and books about religion it was an easy, well constructed book. It was written in a style that was comfortable for the non-scholar to comprehend but I suspect that my interest in the topic and working knowledge of Catholicism helped with full understanding.

You can see The Myth of Persecution Tour Schedule

You can purchase The Myth of Persecution on Amazon.com

Disclosure:  I received a free copy of The Myth of Persecution from TLC Book Tours for my honest review. I received no compensation for this post.