The Other Windsor Girl by Georgie Blalock – Book Review

As any of you that come here with any regularity know, I have a passion for historical fiction. Particularly English historical fiction. Like most of the Anglophiles in the country I have been enthralled by The Crown on Netflix so when I was offered The Other Windsor Girl by Georgie Blalock from TLC Book Tours at no charge for my honest review I just about screamed yes. 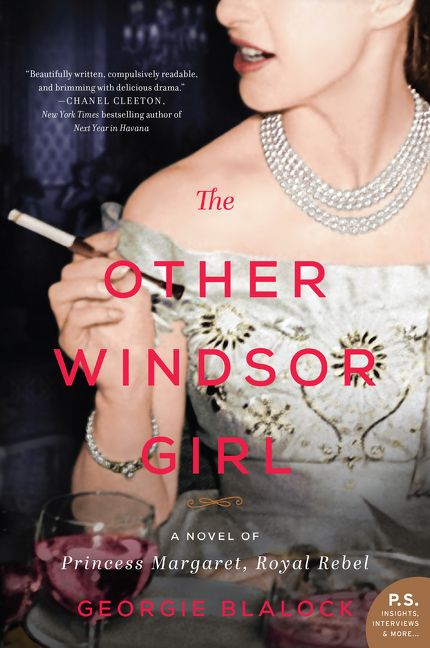 About The Other Windsor Girl:

In a historical debut evoking the style of The Crown, the daughter of an impoverished noble is swept into the fame and notoriety of the royal family and Princess Margaret’s fast-living friends when she is appointed as Margaret’s second Lady-in-Waiting.

Diana, Catherine, Meghan…glamorous Princess Margaret outdid them all. Springing into post-World War II society, and quite naughty and haughty, she lived in a whirlwind of fame and notoriety. Georgie Blalock captures the fascinating, fast-living princess and her “set” as seen through the eyes of one of her ladies-in-waiting.

In dreary, post-war Britain, Princess Margaret captivates everyone with her cutting edge fashion sense and biting quips. The royal socialite, cigarette holder in one hand, cocktail in the other, sparkles in the company of her glittering entourage of wealthy young aristocrats known as the Margaret Set, but her outrageous lifestyle conflicts with her place as Queen Elizabeth’s younger sister. Can she be a dutiful princess while still dazzling the world on her own terms?

Post-war Britain isn’t glamorous for The Honorable Vera Strathmore. While writing scandalous novels, she dreams of living and working in New York, and regaining the happiness she enjoyed before her fiancé was killed in the war. A chance meeting with the Princess changes her life forever. Vera amuses the princess, and what—or who—Margaret wants, Margaret gets. Soon, Vera gains Margaret’s confidence and the privileged position of second lady-in-waiting to the Princess. Thrust into the center of Margaret’s social and royal life, Vera watches the princess’s love affair with dashing Captain Peter Townsend unfurl.

But while Margaret, as a member of the Royal Family, is not free to act on her desires, Vera soon wants the freedom to pursue her own dreams. As time and Princess Margaret’s scandalous behavior progress, both women will be forced to choose between status, duty, and love…

You can purchase The Other Windsor Girl at Harper Collins

Georgie Blalock is an amateur historian and movie buff who loves combining her different passions through historical fiction, and a healthy dose of period piece films. When not writing, she can be found prowling the non-fiction history section of the library or the British film listings on Netflix. Georgie writes historical romance under the name Georgie Lee. Please visit www.georgieblalock.com for more info about Georgie and her writing.

Queen Elizabeth is very well known around the world. The advent of The Crown on TV has reawakened an interest in the early years of her reign and in some of the other members of the aristocracy.  The Other Windsor Girl explores the life of the Queen’s sister, Princess Margaret through her relationship with a fictional character named Vera Strathmore.

WWII has ended and there is a desire, almost a need for those that survived to feel like everything is back to normal. But it is far from it; so many families lost sons, brothers, fathers. So many women lost husbands and fiances. The old families are finding it hard to keep up appearances as they just don’t have the money to keep their great estates functioning. But through it all the monarchy continues on and Princess Margaret is out and about with her “set” enjoying these happy post war times.

Vera Strathmore is the daughter of a baron; her father hasn’t been able to adjust to the changing times and their financial position is precarious. Vera was engaged but her fiance died in the War. Now her parents treat her as a burden on the family. Until her cousin takes her out one night to take her mind off of things and introduces her to Princess Margaret – who takes a liking to her. Suddenly Vera finds herself thrust into the highest levels of the aristocracy. Margaret requests her service as a Lady in Waiting – and how does one say no to a Princess?

Vera soon finds her life is nothing like it used be nor is it what she wanted it to be. It is, however very exciting. But is it the kind of exciting she wants? She wants to move to New York and write a novel but can’t seem to save enough money to accomplish this goal. Maybe associating with Margaret will present her with opportunities or contacts to help her.

On the surface it’s awfully hard to feel sorry for Margaret Windsor; she had every priviledge that a person could want and yet she had less freedom than most ordinary people with next to nothing. Born into a system that required a way of life that most of us could not begin to comprehend it’s hard to guess why she didn’t fully rebel. But someone born to service to the crown…

I read this book in one afternoon; I just dove in and once I started I didn’t want to stop until I was finsished. Truth be told, the little I know of Princess Margaret I know from watching The Crown. Most of the historical fiction I read is further back in history but I must admit that I do find this more current time interesting.

Ms. Blalock brings post War England to life in its mix of shabby and hopeful. It was a time of hope and rebuilding for the English people after a long period of rationing and dealing with bombing raids. Princess Margaret was a woman without a real place in the world. Her sister was Queen but she felt she had no relevance. She was also proscribed from doing what she wanted by hundreds of years of royal protocal.

Vera subsumed her life to Margaret in her role as lady in waiting and had to decide if this was they way she wanted to live. No one can live for too long as someone’s shadow. How would Vera make her life relevant again? Well, you’ll just have to read the book to find out how it all plays out. It’s well worth the read. It’s a compelling, fast paced read and very entertaining.