I was introduced to author Kristy Cambron with last year’s The Lost Castle. I loved that book so I was very happy to accept a copy of her latest book, The Painted Castle from TLC Book Tours at no charge for my honest review. 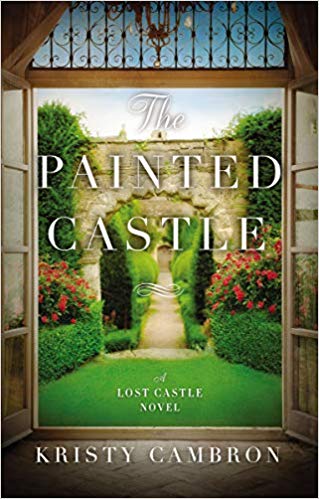 About The Painted Castle:

A lost painting of Queen Victoria.

A library bricked off from the world.

And three women, separated by time, whose lives are irrevocably changed.

When art historian Keira Foley is hired to authenticate a painting at a centuries-old East Suffolk manor, she hopes this is just the thing to get her career and life back on track. But from the time she arrives at Parham Hill Estate and begins working alongside rumored art thief Emory Scott, she’s left with far more questions than answers. Could this lost painting of Queen Victoria be a duplicate of the original Winterhalter masterpiece, and if so, who is the artist?

As Keira begins to unravel the mystery behind the portrait, two women emerge from the estate’s forgotten past. In Victorian England, talented sketch artist Elizabeth Meade is engaged to Viscount Huxley, then owner of Parham Hill. However, Elizabeth’s real motive for being at Parham Hill has nothing to do with art or marriage. She’s determined to avenge her father’s brutal murder—even if it means a betrothal to the very man she believes committed the crime.

A century later, Amelia Woods—a World War II widow who has turned Parham Hill and its beloved library into a boarding school for refugee children—receives military orders to house a troop of American pilots. She is determined the children in her care will remain untouched by the war, but the task is proving difficult with officers taking up every square inch of their world . . . and one in particular vying for a space in Amelia’s long-shut up heart.

Set in three time periods—the rapid change of Victorian England, the peak of England’s home-front tensions at the end of WWII, and modern day—The Painted Castle unfolds a story of heartache and hope and unlocks secrets lost for generations just waiting to be found.

KRISTY CAMBRON is an award-winning author of historical fiction, including her bestselling debut The Butterfly and the Violin, and an author of Bible studies, including the Verse Mapping series. She’s a Women’s Ministry Leader at Southeast Christian Church in Louisville, KY, and a passionate storyteller who travels to speak at events across the country, encouraging women to experience a deeper life in the Word through verse mapping. Her work has been named to Publishers Weekly Religion & Spirituality TOP 10, Library Journal Reviews’ Best Books, RT Reviewers’ Choice Awards, and received 2015 & 2017 INSPY Award nominations. Kristy holds a degree in Art History/Research Writing, and has 15 years of experience in education and leadership development for a Fortune-100 Corporation, working with such companies as the Disney Institute, IBM/Kenexa, and Gallup. She lives in Indiana with her husband and three sons, and can probably be bribed with a coconut mocha latte and a good read.

This is the third of three books in the Lost Castle Series. I have to admit that I’m sorry to see the series end but I suppose there can only be so many castles that are either truly lost or have a mystery within them. Unless one subscribes to the Hallmark movie theory of life and finds that there are any number of countries out there ending in “ovia” with handsome princes looking for wives and living in big castles.

The Painted Castle takes place in England in three timelimes – the early Victorian age,  towards the end of WWII, and current day. I will admit it took my addled brain a few chapters to sort everyone out and keep them straight and in their time period.

In the current day Keira is working at her family’s pub in Dublin while dealing with the fallout from a bad work and relationship experience in New York. There she meets Emory, a man with his own set of baggage that wants to hire her for a mysterious job at a castle in England.

That same castle was not far from an air base during WWII. The vicountess was left a widow when her husband was killed in battle. She was managing through the war years by taking in orphans and reluctantly opening the castle as a billet for the American flyers from the air field.

It’s the tale from the Victorian era that truly drives the tale as it involves a young woman, a daughter of an earl who loves to draw and secretly longs to make her way as an artist but the strictures placed on her will not allow that. Tragedy strikes and circumstances force her into seeking a husband. Her mother finds her a match but she is not sure. Her fiance is friends with one of the most popular portraitists of the day and soon she is painting with and learning from this man. Her betrothed has no problems with her persuing this hobby – in fact he encourages it. This happy occurance leads to her accompanying the painter to a royal appointment where he is to paint Queen Victoria!

Which brings us back to the present day – a portrait of Queen Victoria is found by the latest owners of the castle and it needs authentication – which is what Keira does! So as all of the stories come together the reader learns the history of the castle and also a history of love.

This was a delightful way to spend an afternoon. Once I got all of the characters in their right time period I was ensnared in this tale of a mystery painting of a queen. The plot zipped along at a good pace with plenty of twists and turns to keep one interested. The characters were interesting – the main ones for sure. I will admit to losing track of Keira’s brothers as there were several of them and they were ancillary to the main story. The romance was sweet and overall a very enjoyable way to spend the afternoon.

Share
Tweet
Pin1
Share
Email
The Emperor’s Assasin by Autumn Bardot – Blog Tour and Book Review
Have You Received Your Flu Shot? If You are Age 50 or Older It’s Important That You Do