I would like to thank Atria Books for sending me a copy of The Parting Glass by Gina Marie Guadagnino at no charge for my honest review. 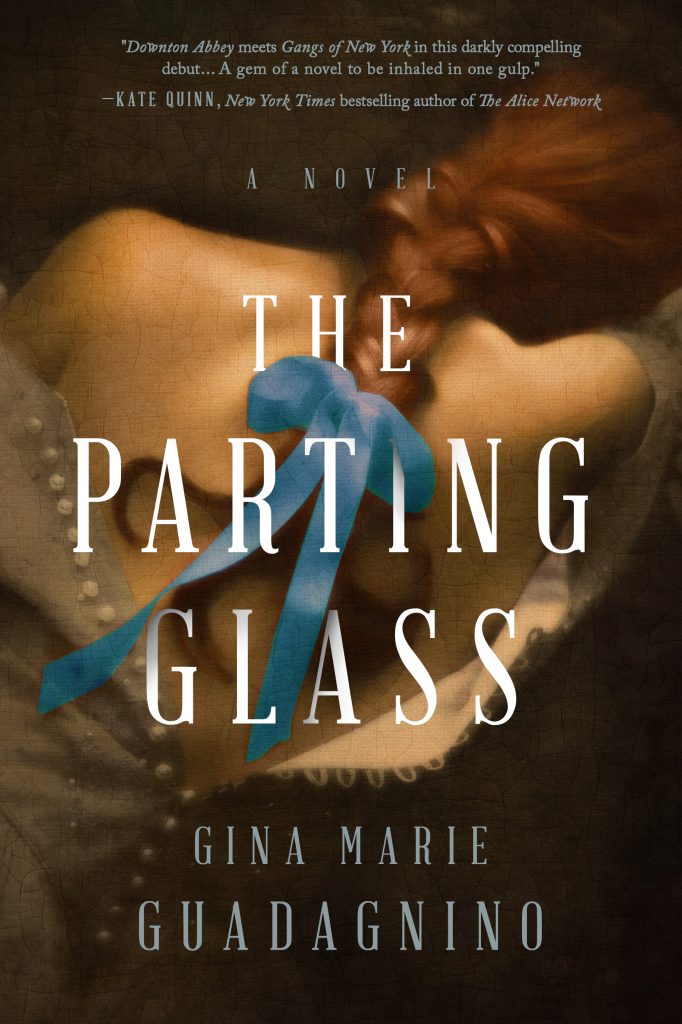 About The Parting Glass:

Devoted maid Mary Ballard’s world is built on secrets, and it’s about to be ripped apart at the seams, in this lush and evocative debut set in 19th century New York, perfect for fans of Sarah Waters’s Fingersmith and Emma Donoghue’s Slammerkin.

By day, Mary Ballard is lady’s maid to Charlotte Walden, wealthy and accomplished belle of New York City high society. Mary loves Charlotte with an obsessive passion that goes beyond a servant’s devotion, but Charlotte would never trust Mary again if she knew the truth about her devoted servant’s past. Because Mary’s fate is linked to that of her mistress, one of the most sought-after debutantes in New York, Mary’s future seems secure—if she can keep her own secrets…

But on her nights off, Mary sheds her persona as prim and proper lady’s maid to reveal her true self—Irish exile Maire O’Farren—and finds release from her frustration in New York’s gritty underworld—in the arms of a prostitute and as drinking companion to a decidedly motley crew consisting of a barkeeper and members of a dangerous secret society.

Meanwhile, Charlotte has a secret of her own—she’s having an affair with a stable groom, unaware that her lover is actually Mary’s own brother. When the truth of both women’s double lives begins to unravel, Mary is left to face the consequences. Forced to choose between loyalty to her brother and loyalty to Charlotte, between society’s respect and true freedom, Mary finally learns that her fate lies in her hands alone.

A captivating historical fiction of 19th century upstairs/downstairs New York City, The Parting Glass examines sexuality, race, and social class in ways that feel startlingly familiar and timely. A perfectly paced, romantically charged story of overlapping love triangles that builds to a white-knuckle climax, this is an irresistible debut that’s impossible to put down.

Gina Marie Guadagnino holds a BA in English from New York University, and an MFA in Creative Writing from the New School. Her work has appeared in the Morris-Jumel Mansion Anthology of Fantasy and Paranormal Fiction, Mixed Up: Cocktail Recipes (and Flash Fiction) for the Discerning Drinker (and Reader). She lives in New York City with her family.

The Parting Glass takes place in 19th century New York at a time when the Irish immigrants are not welcome. Mary and her twin brother John have arrived from Ireland after being forced to leave. They have found a home of sorts living in the basement of a bar popular with many fellow immigrants. Both have found a job with a society matron; Mary as a lady’s maid, John in the stables.  In addition, to complicate matters both of them have fallen in love with the daughter of the house, Charlotte. Mary resents and is jealous of her brother’s relationship with her.

The novel deals with a number of complicated issues of the time from the violence caused by the anti Irish bias in the city to the way women of wealth are bartered on a marriage market. Mary’s relationships with women are not seen as overly shocking to those that know her but she still knows she has to keep her true self secret.

Ms. Guadagnino handles the many subplots in a very deft way as each different story moves smoothly in and out of the other tales. They all come together in a very surprising ending. The author brought the time period alive with descriptions of the balls in the houses of the rich and the press of people in Irish bar on the other side of town.