I received a free copy of The Partner Track from the publisher for my honest review. I received no compensation for this post. 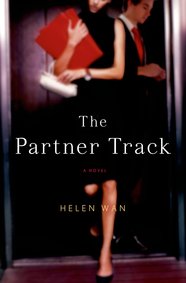 A young attorney must choose between the prestige of partnership and  the American Dream that she—and her immigrant parents—have come so close to achieving in The Partner Track, a riveting debut from Helen Wan

In the eyes of her corporate law firm, Ingrid Yung is a “two-fer.” As a Chinese-American woman about to be ushered into the elite rank of partner, she’s the face of Parsons Valentine & Hunt LLP’s recruiting brochures–their treasured “Golden Girl.” But behind the firm’s welcoming façade lies the scotch-sipping, cigar-smoking old-boy network that shuts out lawyers like Ingrid. To compensate, Ingrid gamely plays in the softball league, schmoozes in the corporate cafeteria, and puts in the billable hours—until a horrifically offensive performance at the law firm’s annual summer outing throws the carefully constructed image way out of equilibrium.

Scrambling to do damage control, Parsons Valentine announces a new “Diversity Initiative” and commands a reluctant Ingrid to spearhead the effort, taking her priority away from the enormous deal that was to be the final step in securing partnership. For the first time, Ingrid finds herself at odds with her colleagues—including her handsome, golden-boy boyfriend—in a clash of class, race, and sexual politics.

HELEN WAN is Associate General Counsel at the Time Inc. division of Time Warner Inc. Before that, she practiced corporate law and media law at law firms in New York.  Born in California and raised near Washington, D.C., Wan is a graduate of Amherst College and the University of Virginia School of Law. Her essays and reviews of fiction have been published in The Washington Post and elsewhere. She lives in Fort Greene, Brooklyn, with her husband and son.

Ingrid Yung worked hard and used her intelligence to secure a partner tack job at a prestigious New York law firm. She feels some insecurity at her success because she is female and Asian so she feels part of her rise is due to her helping to fill a diversity quota. She therefore works extra hard to show that she is a very good lawyer. When chosen to work on the latest, super secret big deal that has come into the firm she feels vindicated and figures her partnership is secured. But for Ingrid that path to partnership is anything but smooth and the bumps come from some very unexpected places.

The Partner Track is a classic story of a smart woman trying to make it in an “old boys” world. No matter how hard she works Ingrid is still just a pretty Asian girl to many of her peers and the clients. She is especially sensitive to anyone making disparaging remarks about her heritage – in fact she will turn from sweet to savage on the turn of a word. I found this a bit disconcerting. I’ve not had to deal with racial discrimination but I’ve certainly dealt with “old boys” having worked in banking in my day. It can be challenging. Ingrid seemed to let everything come back around to race and it did get a bit old in a book of this length. That being said I did enjoy the book and found it a nice change of pace from my usual historical reads. The New York setting was as much a character as Ingrid and her fellow associates in the firm and that was a delight.

The book was a fast, enjoyable read with plenty of twists. A little dry when the legal case was front and center but living with a lawyer makes me aware of the minutia of the law. The ending was a real kicker and a truly perfect way for it all to finish for Ingrid.

You can read an excerpt of The Partner Track

You can purchase The Partner Track on Amazon.com

Disclosure:  I received a free copy of The Partner Track from the publisher for my honest review. I received no compensation for this post.