by
Patty
-
I always enjoy a new book from C.W. Gornter. I thank Historical Fiction Virtual Book Tours for sending me a free copy of The Queen’s Vow for my honest review. 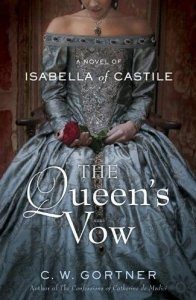 About The Queen’s Vow:

No one believed I was destined for greatness. So begins Isabella’s story, in this evocative, vividly imagined novel about one of history’s most famous and controversial queens—the warrior who united a fractured country, the champion of the faith whose reign gave rise to the Inquisition, and the visionary who sent Columbus to discover a New World. Acclaimed author C. W. Gortner envisages the turbulent early years of a woman whose mythic rise to power would go on to transform a monarchy, a nation, and the world. Young Isabella is barely a teenager when she and her brother are taken from their mother’s home to live under the watchful eye of their half-brother, King Enrique, and his sultry, conniving queen. There, Isabella is thrust into danger when she becomes an unwitting pawn in a plot to dethrone Enrique. Suspected of treason and held captive, she treads a perilous path, torn between loyalties, until at age seventeen she suddenly finds herself heiress of Castile, the largest kingdom in Spain. Plunged into a deadly conflict to secure her crown, she is determined to wed the one man she loves yet who is forbidden to her—Fernando, prince of Aragon. As they unite their two realms under “one crown, one country, one faith,” Isabella and Fernando face an impoverished Spain beset by enemies. With the future of her throne at stake, Isabella resists the zealous demands of the inquisitor Torquemada even as she is seduced by the dreams of an enigmatic navigator named Columbus. But when the Moors of the southern domain of Granada declare war, a violent, treacherous battle against an ancient adversary erupts, one that will test all of Isabella’s resolve, her courage, and her tenacious belief in her destiny. From the glorious palaces of Segovia to the battlefields of Granada and the intrigue-laden gardens of Seville, The Queen’s Vowsweeps us into the tumultuous forging of a nation and the complex, fascinating heart of the woman who overcame all odds to become Isabella of Castile.

C.W. Gortner is the author of The Last Queen, The Confessions of Catherine de Medici and The Tudor Secret.  He holds an MFA in Writing with an emphasis in Renaissance Studies from the New College of California.In his extensive travels to research his books, he has danced a galliard in a Tudor great hall and experienced life in a Spanish castle. His novels have garnered international praise and been translated into thirteen languages to date. He is also a dedicated advocate for animal rights and environmental issues.He’s currently at work on his fourth novel for Ballantine Books, about the early years of Lucrezia Borgia, as well as the third novel in his Tudor series,The Elizabeth I Spymaster Chronicles (US) or Elizabeth’s Spymaster (UK).Half-Spanish by birth, C.W. lives in Northern California.

This novelization of the life of Isabella of Castile covers up to her sponsorship of Columbus and concentrates more on her childhood than on her time as Queen. It was, I must say, very interesting to get a peak into the life of such a woman from her earliest days. We first meet Isabella as her father lay dying and her life turns upside down. Her mother was a second wife and she knew that she was going to be unwanted by the next king – her stepson – so they flee and Isabella loses all that she knew.

She grows up with a strong sense of duty and strongly bound to her Catholic religion. She never expects that she would ever be Queen – but the possibility is out there as Castile does allow for female rulers. We all know what happens as Isabella does end up on the throne and Mr. Gortner does a fine job of explaining the convoluted politics of the time and how Isabella came to rule with her Ferdinand.

The two things I feel she is most remembered for are the Inquisition and Columbus and neither are given in depth coverage in the book. Columbus shows up at the end and the Inquisition is alluded to by discussions and the popping in and out of Torquemada. Whatever good she did for Spain, she also loosed a monster. I understand they were difficult times but the existence of the Inquisition can’t be downplayed.

Overall though Mr. Gortner is one of those writers that just draws you into time and place so brilliantly. His descriptions of clothing, food, atmosphere all combine to create a magical experience for the reader. You truly feel as if you are there with the characters. I love those kinds of books….


Other Books by C.W. Gortner: