The Reckoning by Alma Katsu Now Out in Paperback – Giveaway

The Reckoning by Alma Katsu, the second book in The Taker Trilogy is now out in paperback. I reviewed this tale when it first arrived on the scene and was as enthralled with it as I was with The Taker.

You can read my review HERE.

I have a copy of The Reckoning to give away to one lucky US reader.
Isn’t the cover stunning? 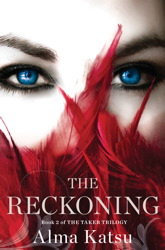 Lanore McIlvrae is the kind of woman who will do anything for love. Including imprisoning the man who loves her behind a wall of brick and stone.

She had no choice but to entomb Adair, her nemesis, to save Jonathan, the boy she grew up with in a remote Maine town in the early 1800s and the man she thought she would be with forever. But Adair had other plans for her. He used his mysterious, otherworldly powers to give her eternal life, but Lanore learned too late that there was a price for this gift: to spend eternity with him. And though he is handsome and charming, behind Adair’s seductive façade is the stuff of nightmares. He is a monster in the flesh, and he wants Lanore to love him for all of time.

Now, two hundred years after imprisoning Adair, Lanore is trying to atone for her sins. She has given away the treasures she’s collected over her many lifetimes in order to purge her past and clear the way for a future with her new lover, Luke Findley. But, while viewing these items at an exhibit at the Victoria and Albert Museum in London, Lanore suddenly is aware that the thing she’s been dreading for two hundred years has caught up to her: Adair has escaped from his prison. He’s free— and he will come looking for her. And she has no idea how she will save herself.


With the stunningly imaginative storytelling and rich characterizations that fascinated readers worldwide and made The Taker a singular and memorable literary debut and an international sensation, Alma Katsu once again delivers “a powerful evocation of the dark side of romantic love” (Publishers Weekly) in her breathtaking new novel.

Alma Katsu has a B.A. in Writing from Brandeis University, where she studied under John Irving, and an M.A. from the Johns Hopkins Writing Program. She lives with her husband in Virginia.

One lucky US reader will win a paperback copy of The Reckoning. How do you win? It’s easy! Just hop on the Rafflecopter! Good luck!

Disclosure:  I was sent a copy of the book and I have chosen to give it away.