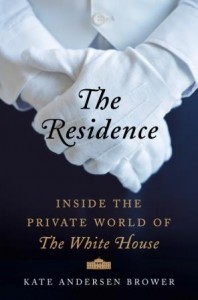 A remarkable history with elements of both In the President’s Secret Service and The Butler, The Residence offers an intimate account of the service staff of the White House, from the Kennedys to the Obamas.

America’s First Families are unknowable in many ways. No one has insight into their true character like the people who serve their meals and make their beds every day. Full of stories and details by turns dramatic, humorous, and heartwarming,The Residence reveals daily life in the White House as it is really lived through the voices of the maids, butlers, cooks, florists, doormen, engineers, and others who tend to the needs of the President and First Family.

These dedicated professionals maintain the six-floor mansion’s 132 rooms, 35 bathrooms, 28 fireplaces, three elevators, and eight staircases, and prepare everything from hors d’oeuvres for intimate gatherings to meals served at elaborate state dinners. Over the course of the day, they gather in the lower level’s basement kitchen to share stories, trade secrets, forge lifelong friendships, and sometimes even fall in love.

Combining incredible first-person anecdotes from extensive interviews with scores of White House staff members—many speaking for the first time—with archival research, Kate Andersen Brower tells their story. She reveals the intimacy between the First Family and the people who serve them, as well as tension that has shaken the staff over the decades. From the housekeeper and engineer who fell in love while serving President Reagan to Jackie Kennedy’s private moment of grief with a beloved staffer after her husband’s assassination to the tumultuous days surrounding President Nixon’s resignation and President Clinton’s impeachment battle, The Residence is full of surprising and moving details that illuminate day-to-day life at the White House.

Kate Andersen Brower spent four years covering the Obama White House for Bloomberg News and is a former CBS News staffer and Fox News producer. She lives outside Washington, D.C., with her husband and their two young children.

I found the premise of this non-fiction book to be rather compelling. I have to be honest – I never really gave much thought to the personnel that keep the White House running. These maids, florists, chefs, electricians and others are not paid extravagantly yet they are privy to the personal side of the First Family occupying the house.

I did find parts of the book very interesting and I don’t want to give too much away. The people who agree to these jobs are a rare breed; loyal, discreet and very hard working. Many of them stay in their jobs for decades despite long hours and erratic schedules. They all serve at the pleasure of the President as the saying goes. Many of them maintain their loyalties to all of the families they served and didn’t want to talk to the author.  We learn that early on in the book and it is reiterated – a lot. This was my biggest problem with the book, there was  a lot of repetition. One story would appear in several different chapters woven into different narratives but how many times can you read the same facts? It was almost as if the book were a compilation of essays with minimal editing. I did read an advanced reader copy so I don’t know if perhaps changes were made before final printing.

The writing style is easy to read and there were many interesting stories in the book and I did learn a bit about what it takes to keep the White House running. I also gained a very healthy respect for the dedication of the employees who work there.