The River by Starlight by Ellen Notbohm – Book Review

I always look forward to book recommendations from Caitlin Hamilton Summie for every time she sends me a book to read (at no charge for my honest review) I never fail to receive a book that enthralls me. The River by Starlight by Ellen Notbohm adds to the reading adventures she has provided me through the years. 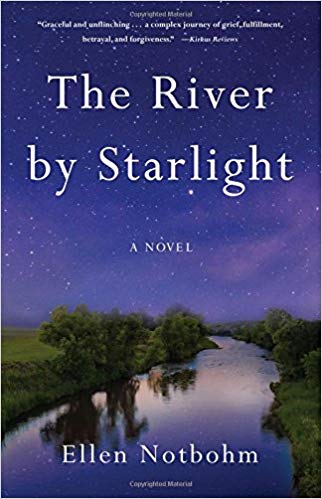 About the River by Starlight:

Her brother’s letter touched a match to the wick of Annie’s doused dreams. Dream enough for her, to stroll the length of a town without the abortive glances, the stilted greetings, the wider berth given her on the sidewalk. “I could use some help out here,” he wrote. “What’s holding you to Iowa anyway?”

Annie Rushton leaves behind an unsettling past to join her brother on his Montana homestead and make a determined fresh start. There, sparks fly when she tangles with Adam Fielding, a visionary businessman-farmer determined to make his own way and answer to no one. Neither is looking for a partner, but they give in to their undeniable chemistry.

Annie and Adam’s marriage brims with astounding success and unanticipated passion, but their dream of having a child eludes them as a mysterious illness of mind and body plagues Annie’s pregnancies. Amidst deepening economic adversity, natural disaster, and the onset of world war, their personal struggles collide with the societal mores of the day. Annie’s shattering periods of black depression and violent outbursts exact a terrible price. The life the Fieldings have forged begins to unravel, and the only path ahead leads to unthinkable loss.

Based on true events, this sweeping novel weaves a century-old story, timeless in its telling of love, heartbreak, healing, and redemption embodied in one woman’s tenacious quest for control over her own destiny in the face of devastating misfortune and social injustice.

An internationally renowned author, Ellen Notbohm’s work has informed and delighted millions in more than twenty languages. Writing from her experiences raising children with autism and ADHD, her perennially popular Ten Things Every Child with Autism Wishes You Knew has been an autism bestseller since 2005.  In addition to her four award-winning books on autism, Ellen’s articles, columns and posts on such diverse subjects as history, genealogy, baseball, writing, and community affairs have appeared in major publications and captured audiences on every continent. Her article collection for Ancestry magazine (2005 – 2010) related stories both poignant and uplifting gathered during extensive research for her long-awaited debut novel, The River by Starlight, to be released in May 2018. A lifelong resident of Oregon, Ellen is an avid genealogist, knitter, reader, beachcomber, and thrift store hound who has never knowingly walked by a used bookstore without going in and dropping coin.

As the book opens Annie is caring for her dying mother. A mother who never really cared all that much for Annie. But Annie feels she needs to stay ’til her mother passes. She does learn that there had been a time where she could have escaped from her unpleasant living arrangement but her mother kept the opportunity from her – Annie’s brother has a homestead in Montana and he invited her to come live with him. He knows that she needs a place to start over.

Finally, Annie can head to Montana for her new life. She slowly settles into life and is finding a remnant of peace and then her brother drops a bombshell on her. He will sell out his homestead to Annie and his friend, Adam, a man from the town who works in a shop but who comes from farming stock. He and Annie have been flirting around each other, but with this offer they would have to get married. Both have secrets from their past; Annie shares hers but tells Adam she does not need to know his.

They do marry and as well as things go in the beginning is as bad as things go after Annie has a baby for  what neither one of them understand is that Annie suffers from post partum psychosis. Because in this time there was no understanding, nor a definition for this condition. As much as Annie longs for a child before one arrives she does not begin to comprehend why she wants to harm the child after it is born.

Adam has his own fears as he saw his mother bury several of his siblings during hard seasons and he knows what it did to her. He does now feel though that he wants to be a father. To take that chance. So these two, with their fears and problems embark on a life together.

This is a rich and complicated tale full of heartache, love and yes, redemption. Annie is a marvelous character. She cannot fathom what overcomes her when she has children and there was no help for women with post partum issues in these days. She was a woman of strong character and a bit ahead of her time but there was nowhere to turn for help. Women who didn’t conform to what men considered appropriate behavior were often put into institutions.

Men were not encouraged to discuss their feelings – particularly in the West where the “cowboy up” attitude is still somewhat prevalent today. So this tale of two damaged individuals trying to make a life together certainly makes for some compelling reading. Life is not easy on a homestead in the West and I’m not going to spoil the detailed plot. Just know that if you pick this book up you will not be able to put it back down until you finish. And it will occupy your thoughts for days after you finish.