I am enjoying my reading of more historical fiction that takes place in the US. I thank Historical Fiction Virtual Book Tours for sending me a copy of The River Jewel by Kathleen Shoop at no charge for my honest review. 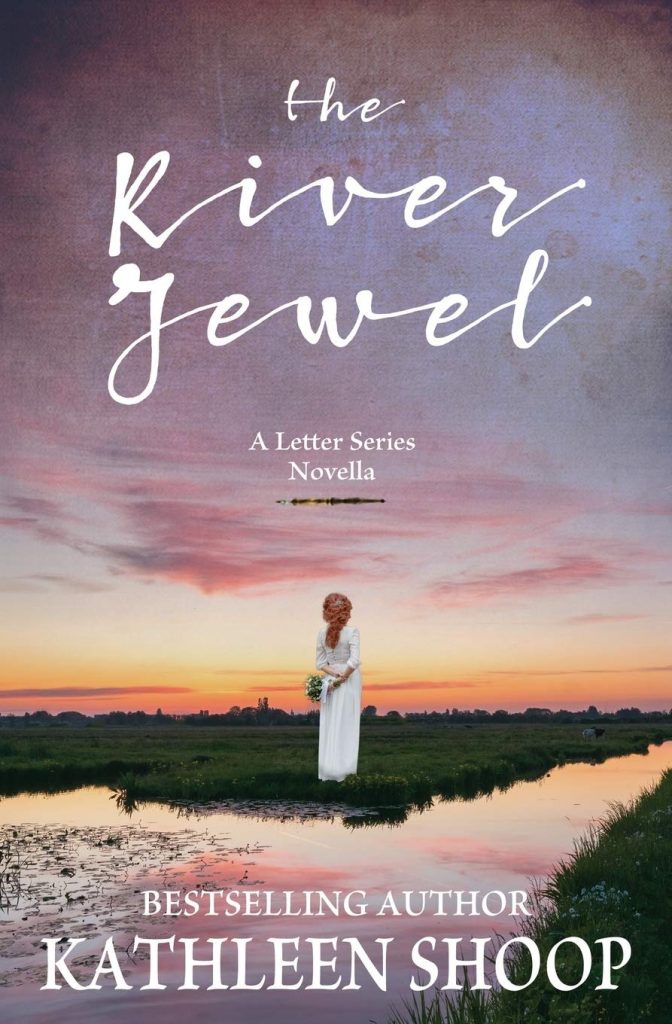 About The River Jewel:

For everyone who hopes to find the perfect match…

The novella, The River Jewel, takes readers of the bestselling Letter Series novels back in time, before there was a last letter, before the Arthurs lost everything, before they knew a girl named Pearl.

Meet Tilly Rabel, a proud oyster-woman, and Landon Lockwood, the troubled son of one of the wealthiest men in America. The two could not be less suited for love. But when an old legend draws Landon to a hidden river cove, Tilly and he find each other, are lured by growing attraction, and repelled by competing desires to control Tilly’s waters. The hidden pool is replete with valuable mussel beds and the source of everything that makes Tilly who she is. Landon sees the illustrious treasure as the path to proving to his parents he is worth their love and worthy of the Lockwood name. Can Tilly trust Landon with her heart, with her beloved mussel beds? Can Landon trust that he has truly changed and doesn’t need his parents approval to live the life he wants?

Heartbreak, triumph, and a very special baby weave a tale sure to please readers who’ve read the entire Letter Series and those who are just starting the journey.

Bestselling author, Kathleen Shoop, holds a PhD in reading education and has more than 20 years of experience in the classroom. She writes historical fiction, women’s fiction and romance. Shoop’s novels have garnered various awards in the Independent Publisher Book Awards (IPPY), Eric Hoffer Book Awards, Indie Excellence Awards, Next Generation Indie Book Awards, Readers’ Favorite and the San Francisco Book Festival. Kathleen has been featured in USA Today and the Writer’s Guide to 2013. Her work has appeared in The Tribune-Review, four Chicken Soup for the Soul books and Pittsburgh Parent magazine. Kathleen coordinates Mindful Writing Retreats and is a regular presenter at conferences for writers.

I adore writing historical fiction (The Letter series, After the Fog and Donora Stories that are coming soon!) but am having a blast writing romance like Home Again, Return to Love and Tending Her Heart (Endless Love series). Thank you so much for the time you take to read.

The River Jewel is a novella, rather than a book coming in at 174 pages. From what I can glean it’s a side story from other books written by the author. I can tell you that I felt no loss of backstory from knowing absolutely nothing about the series or characters.  It was a really engaging way to spend a couple of hours. In fact, I rather liked the concept – especially at this very busy time of year when I’m drowing in whatever the husband brings in from the garden. To be able to escape into another world without a huge time commitment was just what I didn’t know I needed.

Landon Lockwood thinks he is all that because he comes from a well to do family  in New York. He gets to Des Moines in search of an investor for an idea he has and finds that all of the social rules he has followed all of his life suddenly don’t matter, nor does his supposed station in life.  He has an idea, he thinks it is great and he is going tget the financing he needs so that he can prove himself to his cold, unloving father.  He longs for his father to approve of him and thinks that becoming a financial success is the way to that love.

To acheive his end he needs to buy land owned by a young woman named Tilly and he thinks she will just fall at the feet of his money. Landon doesn’t understand that money is not the be all and end all for everyone. Tilly makes beautiful mother of pearl items from the mussels that live in the river where her land lies. She was taught by her mother. She is happy in her life and doesn’t need much. Landon has great difficulty comprehending this mindset but he is also very intrigued by Tilly. Tilly originally runs from Landon but there is something about him that captures her attention.

The River Jewel was a delightfully diverting way to get away from the world for a short while for an engaging romance with an engaging couple. The writing was crisp and the story moved right along. I think I might need more novellas in my life.