The Romanov Empress by C.W. Gortner – Blog Tour and Book Review with a Giveaway

Any day I can read an historical fiction novel by C.W. Gortner is a great day. This time Mr. Gortner takes on that famous Russian dynasty with The Romanov Empress. I thank Historical Fiction Virtual Book Tours for sending me a copy at no charge. 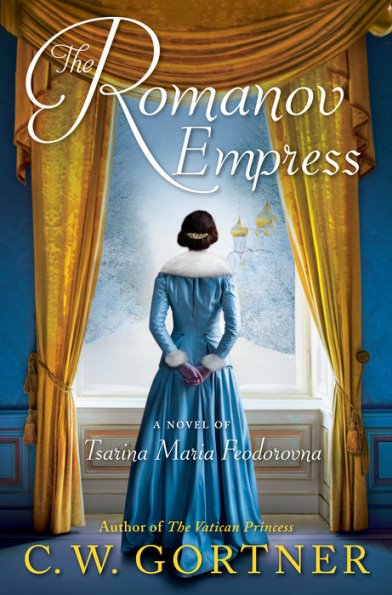 About The Romanov Empress:

Even from behind the throne, a woman can rule.

Narrated by the mother of Russia’s last tsar, this vivid, historically authentic novel brings to life the courageous story of Maria Feodorovna, one of Imperial Russia’s most compelling women, who witnessed the splendor and tragic downfall of the Romanovs as she fought to save her dynasty in the final years of its long reign.

Barely nineteen, Minnie knows that her station in life as a Danish princess is to leave her family and enter into a royal marriage—as her older sister Alix has done, moving to England to wed Queen Victoria’s eldest son. The winds of fortune bring Minnie to Russia, where she marries the Romanov heir and becomes empress once he ascends the throne. When resistance to her husband’s reign strikes at the heart of her family and the tsar sets out to crush all who oppose him, Minnie—now called Maria—must tread a perilous path of compromise in a country she has come to love.

Her husband’s death leaves their son Nicholas II as the inexperienced ruler of a deeply divided and crumbling empire. Determined to guide him to reforms that will bring Russia into the modern age, Maria faces implacable opposition from Nicholas’s strong-willed wife, Alexandra, whose fervor has lead her into a disturbing relationship with a mystic named Rasputin. As the unstoppable wave of revolution rises anew to engulf Russia, Maria will face her most dangerous challenge and her greatest heartache.

From the opulent palaces of St. Petersburg and the intrigue-laced salons of the aristocracy to the World War I battlefields and the bloodied countryside occupied by the Bolsheviks, C. W. Gortner sweeps us into the anarchic fall of an empire and the complex, bold heart of the woman who tried to save it. 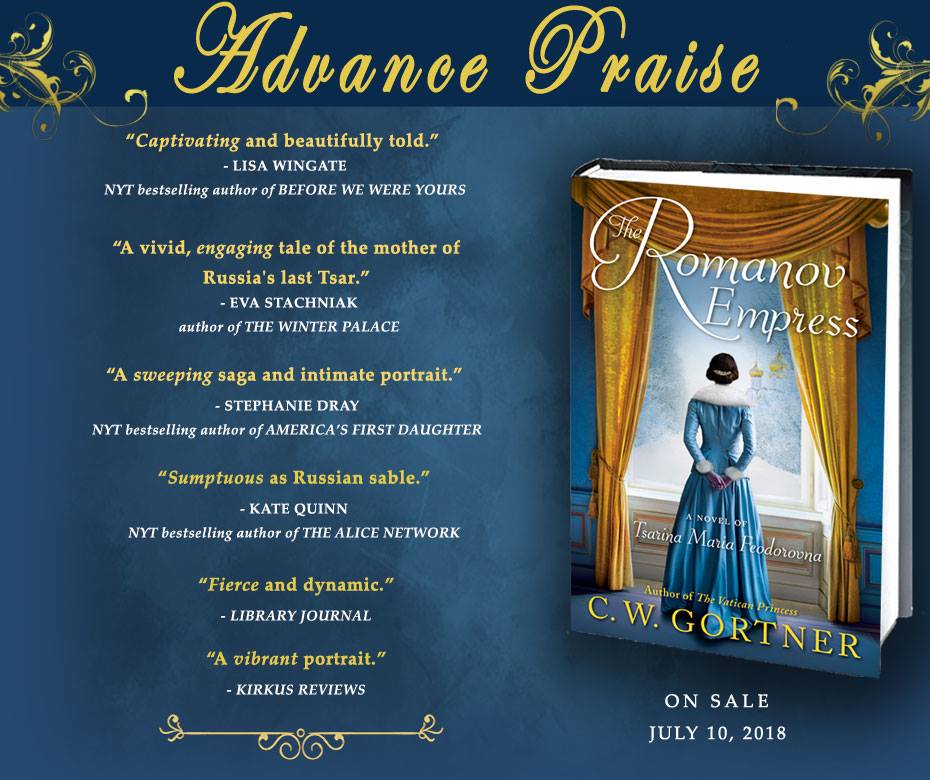 C. W. Gortner holds an MFA in writing, with an emphasis on historical studies, from the New College of California. He is the internationally acclaimed and bestselling author of Mademoiselle Chanel, The Queen’s Vow, The Confessions of Catherine de Medici, The Last Queen, The Vatican Princess, and Marlene, among other books. He divides his time between Northern California and Antigua, Guatemala.

Most are familiar with the story of Nicholas and Alexandra and their children. The horror of their executions has resonated through history. The subsequent mystery of were they all killed or did Anastasia survive kept that family at the forefront of Russia’s pre-revolution history. But before Nicholas and Alexandra there was long line of Emperors and Empresses. This book brings the life of one of them to vivid life.

Empress Maria Feodorovna  is the subject of this rich and fascinating book. I will admit to not knowing all that much about her. Most of the reading I’ve done has focused on the more tragic Romanov. Empress Maria has proven to be a most compelling subject and I find myself wanting to know more.

She came to Russia as a 19 year old bride not for the man she expected to marry but rather for his brother. She was engaged to Nicholas (yes another one by that name) but he died unexpectedly. She then married his brother, Alexander. They had a solid marriage despite Alexander’s moving the country backward from his father’s moves for a representative Duma. It was a time of great upheaval and forces were actively trying to kill the royal family. Alexander did not agree with his father and his attitudes most likely did not help what was to come. Nor did he do his first born any favors in regards to how to rule a country.

The history is the history and I’m not going to relay it any further within this review. Mr. Gortner does an exceptional job of weaving the march of revolution through his story of this amazing woman. For it is Maria’s story. Many others play important roles but she is the star and she is brought to vivid life. Her passion for her country, her family and her causes is  present as well as her humanity. Even though she was Empress of all the Russias, she was also a wife and mother.

The world that the characters inhabit is also brought vibrantly to life. The descriptions of the various palaces in the different seasons were magical. The fashions were deliciously described and the parties of the royal family and their ilk were lavishly portrayed. Mr. Gortner has that magic way with words to bring a world to life so that you forget you are reading and you just float through a world until sadly, it ends.

There was not going to be a happy ending to this book unless it ended somewhere other than the end. It doesn’t quite finish Nicholas and Alexandra’s stories but it is not their tale. It’s the story of a young girl who became a remarkable Empress. It is well worth reading for those that know and enjoy the history of Russia and for those that want to start to learn about how rich and dramatic it is.

During the Blog Tour we will be giving away a copy of The Romanov Empress to one lucky reader! To enter, please enter via the Gleam form below.

– Giveaway ends at 11:59pm EST on August 10th. You must be 18 or older to enter.
– Giveaway is open to US residents only.
– Only one entry per household.
– All giveaway entrants agree to be honest and not cheat the systems; any suspect of fraud is decided upon by blog/site owner and the sponsor, and entrants may be disqualified at our discretion.
– Winner has 48 hours to claim prize or new winner is chosen. (I don’t know if there is an entry for leaving a comment on the blog or not. If there is, just leave it on the link listed above. It goes to the instagram post for the book. That will count just fine.)