Russian history holds a fascination for me; it started because of a wonderful professor in college. It truly made it come alive. I was therefore quite thrilled to accept The Romanov Sisters by Helen Rappaport from St. Martin’s Press for review. A copy was sent at no charge for my honest review. 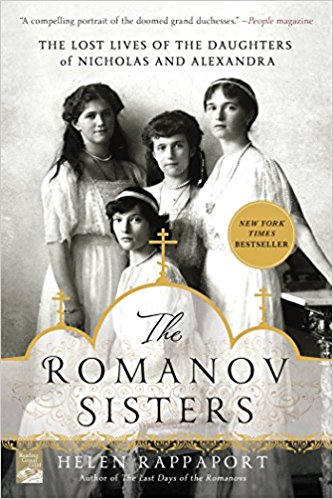 HELEN RAPPAPORT studied Russian at Leeds University and is a specialist in Russian and nineteenth-century women’s history. She lives in Oxford.

There is a certain fascination with all things Romanov that I think anyone with a love for history holds. Their story is so tragic and the loss of what might have been has generated many a sigh. I’ve read many books about this period in history and quite a few of them have been focused on Nicolas and Alexandra but this is the first book to purport to speak solely for the four Grand Duchesses. Little is left to history of their private lives but what there is is well presented in this eminently readable non-fiction book.

The book does not solely focus on the girls as they did not live in a vacuum. It presents the full background of their parent’s love story and the struggle Alexandra had to fit into Russian society. Her “misfortune” in presenting the country with the four girls when it so needed a male heir caused her to be scorned which led her to just about hide from society. She wanted to live a life of domesticity with her husband and children. She did finally produce the heir, Alexey – but he had hemophilia. This was kept from the people of Russia at all costs so they would not know that he was sick.

All seemed to be going well and then as we all know from our history the Russian Revolution occurred and the royal family was sent to live in “protective custody” for their “safety.” But they were prisoners of the state. And all know their sad end.

I  – and I hesitate to use the word enjoyed since the story is so sad – did enjoy the book. It read like fiction as opposed to non-fiction but the tale of this doomed family. The book is very well researched and extensively footnoted. The book does not take you to their demise so you can almost hope for a different ending for these four lively women who did not deserve the ending they received. As one chapter noted – it was perhaps too much mother love that killed them for if their mother had been willing to let them go they might have traveled to relatives and survived.