The Round House by Louise Erdrich – Blog Tour and Book Review 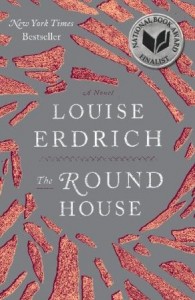 • Hardcover: 336 pages
• Publisher: Harper (October 2, 2012)
One Sunday in the spring of 1988, a woman living on a reservation in North Dakota is attacked. The details of the crime are slow to surface as Geraldine Coutts is traumatized and reluctant to relive or reveal what happened, either to the police or to her husband, Bazil, and thirteen-year-old son, Joe. In one day, Joe’s life is irrevocably transformed. He tries to heal his mother, but she will not leave her bed and slips into an abyss of solitude. Increasingly alone, Joe finds himself thrust prematurely into an adult world for which he is ill prepared.
While his father, who is a tribal judge, endeavors to wrest justice from a situation that defies his efforts, Joe becomes frustrated with the official investigation and sets out with his trusted friends, Cappy, Zack, and Angus, to get some answers of his own. Their quest takes them first to the Round House, a sacred space and place of worship for the Ojibwe. And this is only the beginning.
Written with undeniable urgency, and illuminating the harsh realities of contemporary life in a community where Ojibwe and white live uneasily together, The Round House is a brilliant and entertaining novel, a masterpiece of literary fiction. Louise Erdrich embraces tragedy, the comic, a spirit world very much present in the lives of her all-too-human characters, and a tale of injustice that is, unfortunately, an authentic reflection of what happens in our own world today.

Louise Erdrich is the author of thirteen novels as well as volumes of poetry, short stories, children’s books, and a memoir of early motherhood. Her novel Love Medicine won the National Book Critics Circle Award. The Last Report on the Miracles at Little No Horse was a finalist for the National Book Award. Most recently,The Plague of Doves won the Anisfield-Wolf Book Award and was a finalist for the Pulitzer Prize. Louise Erdrich lives in Minnesota and is the owner of Birchbark Books, an independent bookstore.

I finished this book over a week ago and I am still not sure how I feel about it. How’s that for a book that stays with you and keeps you thinking? It is so much more than the sum of of its synopsis and sadly in some ways, so much less.

The tale is narrated by Joe, the 13 year old son of Geraldine and Bazil Coutts. They all live on the reservation in North Dakota and one day Geraldine is brutally attacked; she is beaten, raped and almost set afire. She escapes but the trauma stays with her and causes her to withdraw into herself. Bazil is a tribal judge and suspects that she knows more than she is telling but she mostly lies in bed and ignores the world.  Bazil begins to investigate the attack and he brings Joe into the investigation despite his age. He soon realizes how foolish this is when Joe and his friends start stalking a possible suspect.

The part of the book dealing with these issues was very compelling. It was heartbreaking, it was hard to read at times and it makes the reader angry at the system of (in)justice in place between the US government and the tribal government. The way it slowly goes about releasing information about wrongs done long ago that come to play in the present really made for great storytelling. Where the book lost me was when it devolved into long and extended forays into almost vulgar depictions of the sexual escapades of the older generation of the extended family of young Joe. Why was it necessary to the story? I don’t understand how it advanced the story or enhanced the story.

Ms. Erdrich has a way with words – there is no denying that but it seems that this was two books mashed into one to the detriment of both. I also don’t understand the lack of quotation marks – this is a new conceit I have seen in several novels this year and it confounds me. What is wrong with quotation marks?

Overall I did enjoy this book. It was thought provoking and it riled my emotions – for the good and the bad. That is what a reader wants from a book and this reader got a lot of riling from The Round House. It’s one I’ll keep to read again. I might get some insight on a second read through that I missed the first time around. There is a LOT going on and it does deserve attention.


You can see The Round House TLC Blog Tour Schedule

You can purchase The Round House on Amazon.com

Disclosure:  I received a copy of The Round House from TLC Book Tours gratis. Any opinions expressed are my honest opinions and were not impacted by my receipt of the free book. I received no monetary compensation for this post.