I received a free netgalley copy of The Shogun’s Daughter from Historical Fiction Virtual Book Tours for my honest review. I received no other compensation for this post.

Publication Date: September 17, 2013
Minotaur Books
Hardcover; 336p
ISBN-10: 1250028612
Japan, 1704. In an elegant mansion a young woman named Tsuruhime lies on her deathbed, attended by her nurse. Smallpox pustules cover her face. Incense burns, to banish the evil spirits of disease. After Tsuruhime takes her last breath, the old woman watching from the doorway says, “Who’s going to tell the Shogun his daughter is dead?”
The death of the Shogun’s daughter has immediate consequences on his regime. There will be no grandchild to leave the kingdom. Faced with his own mortality and beset by troubles caused by the recent earthquake, he names as his heir Yoshisato, the seventeen-year-old son he only recently discovered was his. Until five months ago, Yoshisato was raised as the illegitimate son of Yanagisawa, the shogun’s favorite advisor. Yanagisawa is also the longtime enemy of Sano Ichiro.
Sano doubts that Yoshisato is really the Shogun’s son, believing it’s more likely a power-play by Yanagisawa. When Sano learns that Tsuruhime’s death may have been a murder, he sets off on a dangerous investigation that leads to more death and destruction as he struggles to keep his pregnant wife, Reiko, and his son safe. Instead, he and his family become the accused. And this time, they may not survive the day.
Laura Joh Rowland’s thrilling series set in Feudal Japan is as gripping and entertaining as ever. 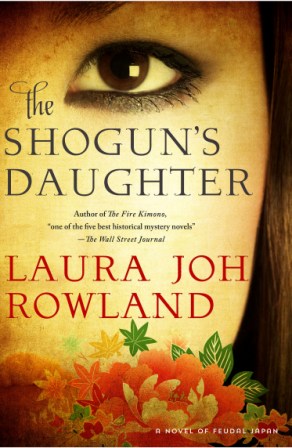 Laura Joh Rowland is the author of a mystery series set in medieval Japan, featuring samurai detective Sano Ichiro. The Shogun’s Daughter is the seventeenth book in the series. Her work has been published in 13 foreign countries, nominated for the Anthony Award and the Hammett Prize, and won the RT Reviewer’s Choice Award for Best Historical Mystery. Laura lives in New York City.
For more information please visit Laura’s website. You can also follow her on Facebook.

I love stories set in Japan and The Shogun’s Daughter does not disappoint. I had not know of the writings of Ms. Rowland prior to this and I’m so happy to have been introduced. I now have 16 books to look forward to in my spare time. (Pause for laughing fit.)

The book opens with the heartbreaking death of the Shogun’s daughter which sets the intrigue in motion. And intrigue there is! The Shogun is well, not too bright and the factions within his cabinet for lack of a better word have been at war for a long time. At this juncture the enemy of our hero Sano Ichiro seems to gain the upper hand by convincing the Shogun that he has fathered a son. Most believe that the son really belongs to Yanigisawa himself but with the Shogun’s backing nothing can be done to bring him down – or can it?

What follows is the intricate weaving together of several plots and yet I never felt confused. Nor did I realize that this was the 17th in a series; I never felt lost or confused about anything going on. The characters were amazing from the littlest children to the most evil of mystics.  Yes, there is a mystical element to this novel that was executed perfectly. I am generally not one for the alternative realities in life (except for a love of time travel novels – go figure) but in this book it was well done and well suited. Sano Ichiro is a hero/detective for the ages and I will look forward to his further adventures.

PLEASE ENTER MY
GIVEAWAY FOR THE SHOGUN’S DAUGHTER.

Disclosure:  I received a free netgalley copy of The Shogun’s Daughter from Historical Fiction Virtual Book Tours for my honest review. I received no other compensation for this post.