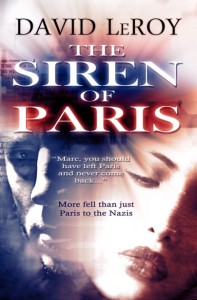 Marc, a French born American student, never suspected that he would become trapped in German occupied France when he came to Paris in the summer of 1939 to study art. While smuggling a  downed airman out of the American Hospital, through the Paris resistance underground, his life is plunged into total darkness when someone he trusts becomes a collaborator agent for the Gestapo. Marc then must fight to save his soul when he is banished to the “Fog and the Night” of Buchenwald, where he struggles with guilt over the consequences of having his trust betrayed.

In writing his first novel, The Siren of Paris, David LeRoy drew upon his longtime interest in philosophy, the visual arts, myth, storytelling, psychology, and Ocean Liner travel. During a visit to France to study art in the fall of 2012, LeRoy became intrigued by the French Resistance, particularly when his research revealed the role of Americans in the Resistance, as well as the limited means of escape from Europe as the war escalated. LeRoy holds a bachelor of arts in philosophy and religion.

In this tale we meet young Marc, an American born in Paris who is leaving America behind to study art. He was pursuing a medical degree but that was for the love of a woman not because he was passionate about becoming a doctor. He wants to be an artist but while in Paris he ends up in the diplomatic service. While escaping the German occupation his ship is torpedoed and Marc ends up back in France now helping the resistance. He finds himself betrayed by the one person he thought he could trust the most and ends up in a death camp.

The story details Marc’s recollections of his life as he tries to enter heaven. He is reliving the war over and over again and he doesn’t know why. We relive it with him through this tale and the author does an excellent job of setting the mood of war torn Paris. The scenes of the refugees moving from the city are truly horrifying, not to mention the scenes in the camps. This is not a happy book by any means but it is a book with purpose and a book that reads well.

The characters are well defined and the story is good. This was an evil time in history and stories of betrayal and forgiveness are always intriguing.

You can purchase The Siren of Paris at Amazon.com


Disclosure:  I received a copy of The Siren of Paris gratis. Any opinions expressed are my honest opinions and were not impacted by my receipt of the free book. I received no monetary compensation for this post.