I received a free copy of The Sisters of Versailles from TLC Book Tours for my honest review. 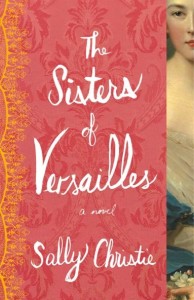 Series: The Mistresses of Versailles Trilogy

Carefully researched and ornately detailed, The Sisters of Versailles is the first book in an exciting new historical fiction trilogy about King Louis XV, France’s most “well-beloved” monarch, and the women who shared his heart and his bed.

The Sisters of Versailles centers on the (relatively, at least for the genre) overlooked period of early 18th century France. The French Revolution and Marie Antoinette have been extensively written about; it’s time for fans of that time period to step further back in time and to explore the reign of Louis XV (1715 – 1774) a time of increasing social turbulence and change that sets the stage neatly for the Revolution that follows.

Goodness, but sisters are a thing to fear.

Set against the lavish backdrop of the French Court in the early years of the 18th century, The Sisters of Versailles is the extraordinary tale of the five Nesle sisters—Louise, Pauline, Diane, Hortense, and Marie-Anne—four of whom became mistresses to King Louis XV. Their scandalous story is stranger than fiction but true in every shocking, amusing, and heartbreaking detail.

Court intriguers are beginning to sense that young King Louis XV, after seven years of marriage, is tiring of his Polish wife. The race is on to find a mistress for the royal bed as various factions put their best foot—and women—forward. The King’s scheming ministers push Louise, the eldest of the aristocratic Nesle sisters, into the arms of the King. Over the following decade, the four sisters—sweet, naïve Louise; ambitious Pauline; complacent Diane, and cunning Marie Anne—will conspire, betray, suffer, and triumph in a desperate fight for both love and power.

In the tradition of The Other Boleyn Girl, The Sisters of Versailles is a clever, intelligent, and absorbing novel that historical fiction fans will devour. Telling the story of a group of women never before written about in English, Sally Christie’s stunning debut is a complex exploration of power and sisterhood—of the admiration, competition, and even hatred that can coexist within a family when the stakes are high enough.

Sally Christie was born in England of British parents but grew up mostly in Canada. As a child she moved around with her family and then continued her wandering as she pursued a career in international development; she’s lived in 14 different countries and worked in many more. She’s now settled in Toronto and loving it.

Sally lives and breathes history; ever since she read Antonia Fraser’s masterful Mary, Queen of Scots when she was 10, she’s been an avid history junkie. She wishes more attention and technical innovation was devoted to time travel, because there is nothing she would rather do than travel back in time! Writing historical fiction is a poor substitute, but it’s the best one we have at the moment.

When not reading and writing history, she’s a tennis and Scrabble fanatic.

The Sisters of Versailles takes place during the early part of the reign of Louis XV. It’s a period not often written about in historical fiction so that was one of the reasons I was drawn to the book. It centers on the five Nesle sisters – daughters of minor aristocracy with a questionable history they are all very different and four of them ended up as mistresses to the King. The book is based in fact; in the author’s note at the end Ms. Christie notes that most of the characters are real people and she explains where she changes a few dates and such.

The book is written in the voices of the five girls. There are also some correspondence between the sisters to help move the story along. Louise is the eldest and sweetest of the girls. She is the first to go to the King. Pauline is grasping and gets it into her head that the King would be better off with her so she gets Louise to invite her to Versailles and practically seduces him away from her sister – I KNOW! Pauline is not a likable character at all. Then when Pauline dies and Louis enters a depression certain factions headed by Richelieu get the third sister, Marie-Anne in front of the King and she proves to be the most awful sister of all – she banishes Louise from court and makes many demands upon Louis. She get her sister Diane to fill in for her while she is pregnant.

Each sister has a distinct personality and that is the problem. They don’t seem to change or grow from the personality assigned to them. Louise is a milksop. Pauline is a termagant, Marie-Ann is a sociopath, Diane is a giggling girl and Hortense is a prig. From when we meet them as teenagers to the end of their lives they never change.

I enjoyed the story but at times it was a bit one note. I also found that the use of the word sororal was most overused. It almost could be a drinking game. You’d have to read the book to understand. I also feel the book lacked a historical background. There was little integration of what was going on in the world outside of Louis’ bed.

YOU CAN READ MY REVIEW OF THE RIVALS OF VERSAILLES

YOU CAN READ MY REVIEW OF THE ENEMIES OF VERSAILLES

YOU CAN PURCHASE THE RIVALS OF VERSAILLES ON AMAZON.COM

YOU CAN PURCHASE THE ENEMIES OF VERSAILLES ON AMAZON.COM

Share
Tweet
Pin
Share
Email
Sally ChristieThe Sisters of Versailles
We are Helping to Save the Bees, Are You? #BeeBold
Baker’s Blues by Judith Ryan-Hendricks – Blog Tour, Book Review and Giveaway