In seeking out some deeper reads I have been turning to novels that explore race and religion. The Solace of Water by Elizabeth Byler Young takes on both in the 1950s. I thank TLC Book Tours for sending me a copy at no charge for my honest review. 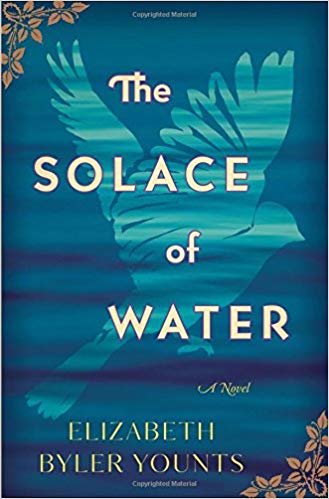 About The Solace of Water:

“Younts has set herself apart with this exquisite story of friendship and redemption . . . I’ll be talking about this book for years to come.” —Rachel Hauck, New York Times bestselling author of The Wedding Dress

In a time of grief and heartache, an unlikely friendship provides strength and solace.

After leaving her son’s grave behind in Montgomery, Alabama, Delilah Evans has little faith that moving to her husband’s hometown in Pennsylvania will bring a fresh start. Enveloped by grief and doubt, the last thing Delilah imagines is becoming friends with her reclusive Amish neighbor, Emma Mullet—yet the secrets that keep Emma isolated from her own community bond her to Delilah in delicate and unexpected ways.

Delilah’s eldest daughter, Sparrow, bears the brunt of her mother’s pain, never allowed for a moment to forget she is responsible for her brother’s death. When tensions at home become unbearable for her, she seeks peace at Emma’s house and becomes the daughter Emma has always wanted. Sparrow, however, is hiding secrets of her own—secrets that could devastate them all.

With the white, black, and Amish communities of Sinking Creek at their most divided, there seems to be little hope for reconciliation. But long-buried hurts have their way of surfacing, and Delilah and Emma find themselves facing their own self-deceptions. Together they must learn how to face the future through the healing power of forgiveness.

Eminently relevant to the beauty and struggle in America today, The Solace of Water offers a glimpse into the turbulent 1950s and reminds us that friendship rises above religion, race, and custom—and has the power to transform a broken heart.

Elizabeth Byler Younts gained a worldwide audience through her first book Seasons: A Real Story of an Amish Girl and is a RITA nominated writer. She is also the author of The Promise of Sunrise series. She has consulted on Amish lifestyle and the Pennsylvania Dutch dialect two award-winning television shows. Elizabeth lives in Central Pennsylvania with her husband, two daughters, and a cockapoo named Fable.

This book is a tough one for me to review. It is without a doubt, beautifully written. It has very strong, compelling characters. The plot is rich and full of complicated issues of race, religion, family, love, loyalty, betrayal, death and redemption. It’s literary so you know I have problems with books that happen over my head. Ms. Byler Younts has brought her characters together in an important period in US history and put them in a place that was supposed to be more progressive than the South – but was it?

DeeDee (Delilah), her husband Malachi and their children move from Alabama to Pennsylvania after the drowning death of one of their twin boys. Malachi is from the small Pennsy town and feels that the change of scenery will help his grieving wife. She blames her eldest daughter, Sparrow for the death of young Carver and DeeDee refuses to move forward in her life – she feels she needs to stay wrapped in blanket of grief or it means she is forgetting her little boy.

Sparrow who is just a typical teenager lost track of the toddler for just a moment and the fast moving river took him under. Her mother blames her and persists in thinking she is a murderer rather than considering it was all just a tragic accident.

The town where they move has a population that includes an Amish community. In fact their new house borders an Amish property. DeeDee doesn’t know what to make of the neighbor woman, Emma as she seems very welcoming and she doesn’t follow the normal rules for black/white interactions.

Emma is living a life full of grief herself so she sees a kindred spirit in DeeDee regardless of her color. She continues to develop a friendship with her despite her husband’s strictures against it.

The story is told in alternating chapters in the voices of DeeDee, Sparrow and Emma as they navigate their lives and the relationships they build with one another.

This was a very compelling book dealing with a lot of dark issues; death, grief, miscarriage, alcohol abuse, self abuse, inter-racial relationships, race relations and more. For me it was just a little too dark. I simply could not relate, nor like any of these characters. I personally wanted to shake DeeDee and tell her to get out of herself that she had other children that needed her. She was killing Sparrow inch by inch and didn’t see it. Selfish woman.

It is hard to like a book when you are that disgusted with the main driver of the story. It is only because of Ms. Byler Younts writing that I kept going. I so wanted to know if this woman ever came around. I am not going to tell you if she did. You are going to have to read the book for yourself. I am not going to tell you it’s an easy book to read – it is not. It’s the kind of book that will make you angry at times. I found myself muttering at times and all out raging in my head at others. Mostly at DeeDee’s inability to see what was right in front of her but also at the inhumanity of the white population to the black people in this time period. (Not that it seems all that much better today.)

I am not unhappy I read this book but it took a toll on me.