The Song of the Jade Lily by Kirsty Manning – Blog Tour, Book Review and Giveaway

For all of my reading of WWII novels I had no idea that Jewish refugees from Germany found a place in Shanghai. I thank TLC Book Tours for sending me a free copy of The Song of the Jade Lily by Kirsty Manning at no charge for my honest review 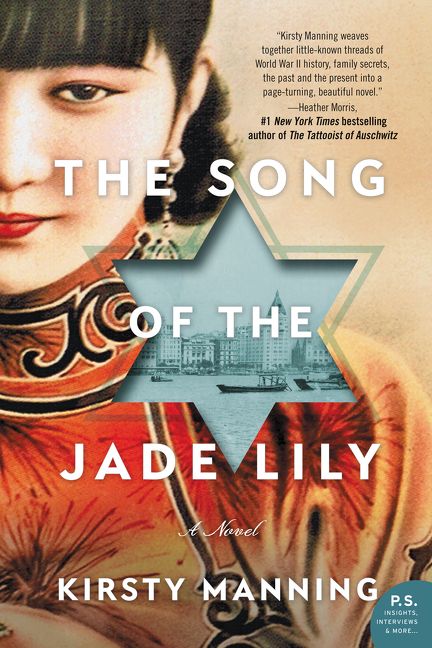 About Song of the Jade Lily:

A gripping historical novel that tells the little-known story of Jewish refugees who fled to Shanghai during WWII.

1939: Two young girls meet in Shanghai, also known as the “Paris of the East”. Beautiful local Li and Jewish refugee Romy form a fierce friendship, but the deepening shadows of World War II fall over the women as they slip between the city’s glamorous French Concession district and the teeming streets of the Shanghai Ghetto. Yet soon the realities of war prove to be too much for these close friends as they are torn apart.

2016: Fleeing London with a broken heart, Alexandra returns to Australia to be with her grandparents, Romy and Wilhelm. Her grandfather is dying, and over the coming weeks Romy and Wilhelm begin to reveal the family mysteries they have kept secret for more than half a century. As fragments of her mother’s history finally become clear, Alexandra struggles with what she learns while more is also revealed about her grandmother’s own past in Shanghai.

After Wilhelm dies, Alexandra flies to Shanghai, determined to trace her grandparents’ past. Peeling back the layers of their hidden lives, she is forced to question what she knows about her family—and herself.

The Song of the Jade Lily is a lush, provocative, and beautiful story of friendship, motherhood, the price of love, and the power of hardship and courage that can shape us all.

Kirsty Manning grew up in northern New South Wales, Australia. She has degrees in literature and communications and worked as an editor and publishing manager in book publishing for over a decade. A country girl with wanderlust, her travels and studies have taken her through most of Europe, the east, and west coasts of the United States as well as pockets of Asia. Kirsty’s journalism and photography specializing in lifestyle and travel regularly appear in magazines, newspapers, and online. She lives in Australia.

Alexandra is a well to do commodities trader living in London when she learns that her beloved grandfather Wilhelm is dying. She head to Australia to say her last goodbyes. While there she spends time with her grandmother Romy and also hopes to find out a little more about her mother who was adopted in Shanghai. Alexandra has just learned she has been transferred to the Shanghai office and while there she hopes to search for her mother’s family. Her grandmother tries to discourage her but she is determined.

Alexandra’s grandmother and grandfather had settled in Australia after the war but their past is somewhat of a mystery to her. This leads to the unfolding of the story of Wihelm, Romy and their good friend Nina. It starts in Nazi Germany on Kristallnacht when the full force of Hitler’s policies are felt by Romy and her family. The hate they encounter stuns them and they realize they will have to leave the country. With help from a compassionate friend some of the family gets out of Germany but they struggle to find a place to land until they learn that they can find a new home in Shanghai.

They settle in but life is not easy and soon the war will find them again as Japan invades China. But along the way Romy and her family find a circle of friends who help them cope with the loss of one son and the imprisonment of another. The story of their lives in Shanghai is rich and detailed.

As the history of Romy’s life is unfolding in the past the reader is also learning about Alexandra’s life in the present. She moves to Shanghai and settles into her apartment and new office and sets off on her search for her mother. Even though she is not looking for love, it finds her. She is just out of a bad relationship and trying to not get involved but sometimes love just presents itself and there is not much you can do about it.

The two stories play out towards their convergence as secrets are revealed and questions are answered. Ms. Manning brings both Shanghai and Australia to life with her writing. She excels at setting a scene whether it’s the horror of a hate attack in Germany or the beauty of a garden in Shanghai. This is not an easy book to read – as no book that delves into any corner of the Nazi regime is ever easy to read but it is one that shows there is always light in the dark.

The characters are the kind that settle into your head and stick with you for days after you finish. The story is well crafted, twisty and full of well paced reveals both in the past and in the present. The Song of the Jade Lily is the kind of book that you want to read, think about and then read again.

One lucky US reader will win a copy of The Song of the Jade Lily. Just enter as many ways as you would like on the Gleam widget below. Good luck everyone.