The Southern Side of Paradise by Kristy Woodson Harvey – Book Review

The Southern Side of Paradise by Kristy Woodson Harvey is the third book in her Peachtree Bluff Series that I have read. I thank the author for sending me the book at no charge for my honest review. 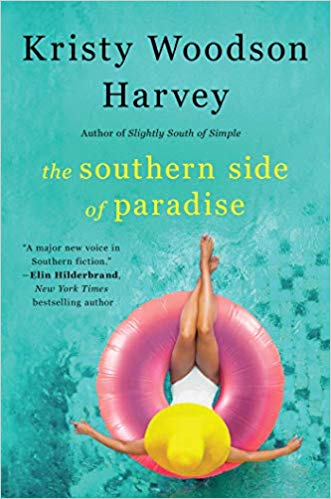 About The Southern Side of Paradise:

With the man of her dreams back in her life and all three of her daughters happy, Ansley Murphy should be content. But she can’t help but feel like it’s all a little too good to be true.

Meanwhile, youngest daughter and actress Emerson, who is recently engaged and has just landed the role of a lifetime, seemingly has the world by the tail. Only, something she can’t quite put her finger on is worrying her—and it has nothing to do with her recent health scare.

When two new women arrive in Peachtree Bluff—one who has the potential to wreck Ansley’s happiness and one who could tear Emerson’s world apart—everything is put in perspective. And after secrets that were never meant to be told come to light, the powerful bond between the Murphy sisters and their mother comes crumbling down, testing their devotion to each other and forcing them to evaluate the meaning of family.

Kristy Woodson Harvey is a born-and-bred North Carolina girl who loves all four seasons—especially fall in Chapel Hill, where she attended college, and summer in Beaufort, where she and her family spend every free moment. The author of The Southern Side of Paradise, The Secret of Southern Charm, Slightly South of Simple, Dear Carolina, and Lies and Other Acts of Love, Kristy is also the founder of the popular interior design blog Design Chic.

As with the first two books I read in the Peachtree Bluff Series, The Southern Side of Paradise centers on one of the daughters of Ansley Murphy. In this story it’s the youngest daughter, Emerson. While she is the focus there are swirling subplots that include Ansley and her newfound old boyfriend and of all things, goats as lawn mowers.

Emerson, like her two older sisters, has come back to Peachtree Bluff and is living with her mother. She has not been feeling well but is reluctant to follow up with the doctor as she fears the worst. She has also fallen back in love with her high school crush and despite forgetting the whys of their break up, she has agreed to marry him. Everyone is up in arms in planning the perfect wedding for her.

Ansley is most definitely ready to marry her first love but doesn’t know how to share an old secret with her girls. And it turns out she is not the only one keeping secrets. Before she can be happy, she needs to make sure her girls are settled and ready for her to have a new man.

The last major character in the book is Peachtree Bluff itself. The town and its denizens are a big part of the story and I can’t leave this plot round up without mentioning the latest idea of the green crowd in the town is to have goats used for lawn maintenance. I would be remiss if I let any kind of goat subplot go by – Famous SpokesGoat Pricilla would further haunt me! I am always in favor of goats in stories but must note that no one would ever have a single goat. It would languish. Goats need a herd, even if they are in a herd of two. (Off goat soapbox now.)

As with Ms. Harvey’s other two Peachtree Bluff novels I found myself entertained  and taken away from my everyday life. I don’t have sisters so in some ways reading about them is a fun diversion for me. I feel as if I really know these characters after three books so it was lovely to join them around the table again. The book is a great beach read; it’s got love, romance, family drama and goats! What more do you need?