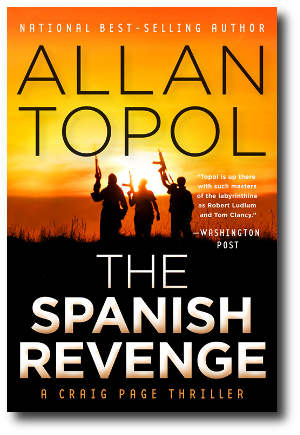 
Craig Page, the bold and daring EU Director of Counterterrorism, becomes the focal point of an effort to stop the feared terrorist Ahmed Sadi, whose goal is to provoke a Muslim uprising in Western Europe. Ahmed, a Muslim fanatic born in Paris to parents who emigrated from Algeria, calls himself Musa Ben Abdil, after a Muslim hero from the Fifteenth Century War with Spain. Page teams up once again the resourceful Elizabeth Crowder, a newspaper reporter who has also become his lover.

Ahmed’s plans become far more menacing when he is joined by Chinese General Zhou, who had been exiled to France for his devious actions in The Spanish Revenge. With Zhou’s assistance, Ahmed’s plan is to launch a horrific attack on the heart of Christianity. At the same time, Ahmed wants to retake militarily for Islam a portion of Southern Spain. He relies upon a medieval parchment he claims to have uncovered, in which Queen Isabella on her death bed in 1504 ceded a portion of Southern Spain to the Muslims in perpetuity. His one main obstacle: Page himself is hot on his trail, determined as ever to save the world from a master criminal. From Spain to Morocco, and beyond to Italy, Page and General Zhou renew their battle, even as Ahmed plots his deadly revenge.

Allan Topol is the national bestselling author of seven novels of international intrigue. He is a graduate of Carnegie Institute of Technology who majored in chemistry, abandoned science, and obtained a law degree from Yale University. A partner in a major Washington law firm, and an avid wine collector, Topol has traveled extensively, researching dramatic locations for his novels. He is a contributor to the Yale Law Report, Glenn Beck’s online magazine, and Military.com. You can visit him at www.AllanTopol.com for more information.

Now and then I like a good suspense novel. It’s nice to escape into a world that is full of over the top characters and events. A world that gets your heart racing and your fingers flying as they rush to turn the pages. A world where the good guys are very, very good and the bad guys are just plain evil. Mr. Topol has created that world.

His hero, Craig Page is a man on a mission. What mission you ask? Come on people, all together now – to save the world. What other mission is there for any self respecting ex-CIA, counter-terrorism head of a sleek European Union agency? In the first book of this trilogy (this being the second) our Mr. Page lost his only daughter to one of our villains, General Zhou. Page  had defeated Zhou’s plans in that first book and the General is out for revenge so he joins up with this books main evil doer, a nonreligious Islamic terrorist (DON’T CALL HIM A TERRORIST. He has a CAUSE), Ahmed Sadi. Sadi has renamed himself after a 15th century Muslim hero – Musa Ben Abdil. He plans to retake Spain from the infidels.

Mayhem ensues and Craig Page and his love, journalist Elizabeth Crowder are here, there and everywhere halting some attacks and gnashing their teeth that others occur. Some stupid mistakes are made by both of them along the way putting them IN PERIL. They are rescued!
I won’t spoil the ending but there is a third book so I will let you figure out whether the world is saved or not.

All implied sarcasm aside I really enjoyed the book. It was fast paced and Mr. Topol kept my interest with his mix of historical content and current affairs. The characters were very well rounded despite my comments above and I find I would like to read the first book and am looking forward to the next and final chapter in the battle between Page and Zhou. It will, I suspect be a humdinger.

You can purchase The Spanish Revenge on Amazon.com

Disclosure:  I received a copy of The Spanish Revenge from Meryl Moss Media gratis. Any opinions expressed are my honest opinions and were not impacted by my receipt of the free book. I received no monetary compensation for this post.