The Stranger You Know by Andrea Kane – Blog Tour, Book Review and Giveaway

I received a free copy of The Stranger You Know from TLC Book Tours for my honest review.  I received no compensation for this post. 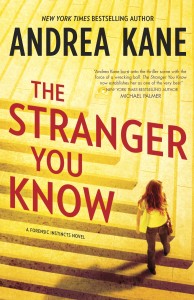 Series: Forensic Instincts
Hardcover: 368 pages
Publisher: Harlequin MIRA (September 24, 2013)
It begins with a chilling phone call to Casey Woods. And ends with another girl dead.
College-age girls with long red hair. Brutally murdered, they’re posed like victims in a film noir. Each crime scene is eerily similar to the twisted fantasy of a serial offender now serving thirty years to life—a criminal brought to justice with the help of Forensic Instincts.
Call. Kill. Repeat. But the similarities are more than one psychopath’s desire to outdo another. As more red-haired victims are added to the body count, it becomes clear that each one has been chosen because of a unique connection to Casey—a connection that grows closer and closer to her.
Now the Forensic Instincts team must race to uncover the identity of a serial killer before his ever-tightening circle of death closes in on Casey as the ultimate target. As the stalker methodically moves in on his prey, his actions make one thing clear: he knows everything about Casey. And Casey realizes that this psychopath won’t stop until he makes sure she’s dead.


Andrea Kane’s psychological thriller The Girl Who Disappeared Twice became an instant New York Times bestseller, the latest in a long line of smash hits. With her acclaimed signature style of developing unforgettable characters and weaving them into carefully researched story lines, Kane has created Forensic Instincts, an eclectic team of maverick investigators. Recruited because of their special talents and dynamic personalities, the high-energy members thrive on blatantly disregarding authority. Armed with skills and talents honed by years in the FBI and Special Forces and with training in behavioral and forensic psychology, this unstoppable team solves seemingly impossible cases while walking a fine line between assisting and enraging law enforcement.
With a worldwide following and novels published in more than twenty languages, Kane is also the author of numerous romantic thrillers and historical romances. She lives in New Jersey with her family, where she is busily crafting a new challenge for Forensic Instincts.
Visit her at www.AndreaKane.com

This is my third novel by Andrea Kane in the Forensics Institute series – that being all of them. I must admit to liking this implausibly perfect group of individuals that have come together to create a super investigative agency to do what law enforcement can’t because they have more money and pay less attention to things like warrants and rights and little things like that. But the purpose of books like these much like the purpose of one hour crime shows is to engage us, make us shake our heads and provide a little heart pumping drama. The Stranger You Know does that despite some utter stupidity on the part of very smart women.

In this installment the team has been hired to help find the daughter of a dying man. Her disappearance bears a striking resemblance to the rape and murder of Casey Wood’s best friend from college. She hopes that in finding this girl she can solve that case too. As the team starts working red haired girls are being murdered and the killer is calling Casey, taunting her that she will be the finale. As they race to put the pieces together the psychopath gets closer to his end game. Who will survive?

This tale can stand alone from the other two novels but I think it helps to have read the previous books if only to understand the relationships between the players. Just knowing the back stories adds a depth of understanding that a reader might not have otherwise. The book does read along at a fast clip with events happening bing, bang, boom! There is a bit of time for romance and a couple of sex scenes not to mention the violence of the murder and rapes but one does not buy thrillers for sweetness and light. I admit to being caught by surprise at a couple of points which I always love in a suspense novel. But the two main women did act at the denouement with complete and utter stupidity that just didn’t make sense with their intelligence levels. If an author is going to develop strong, intelligent women please have them act that way. Don’t have them revert to idiots just so they can be saved by the big, strong men.

You can see The Stranger You Know Tour Schedule

One lucky reader will win a copy of The Stranger You Know. How do you win? It’s easy – just hop on the Rafflecopter. Good luck everyone.

Disclosure: I received a free copy of The Stranger You Know from TLC Book Tours for my honest review.  I received no compensation for this post.