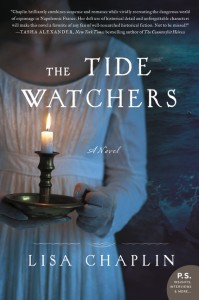 In the winter of 1803, one woman stands between Napoleon and the fall of Great Britain

The free-spirited daughter of an English baronet, Lisbeth defies convention by eloping to France. When her husband abandons her, she must find a way to survive and be reunited with her young son, who is in the care of her mother-in-law.

A seasoned spy known as Tidewatcher, Duncan apprenticed under Lisbeth’s father and pledged to keep his mentor’s pretty daughter safe—a promise complicated by the wily Napoleon Bonaparte. The British believe he is planning an attack, and Duncan is sent to search for signs of invasion on the French coast—where he draws dangerously close to adventurous and unpredictable Lisbeth.

A sensational new invention may shift the tide of a French victory. A brilliant and eccentric American inventor named Robert Fulton has devised a deadly weapon that can decimate an enemy’s fleet. To protect English ships, Tidewatcher must gain control of Fulton’s invention and cross enemy lines . . . but he cannot do it alone. Left with no other options, he enlists Lisbeth’s help in outwitting the American inventor and uncovering Bonaparte’s secret plans.

Going undercover for the handsome and duty-bound spy, Lisbeth risks her freedom and her life as she navigates double agents and submarine warfare to outwit the greatest military tactician in history. The only question is . . . who can she trust?

Lisa Chaplin has published twenty contemporary romances under a pseudonym, but the publication of The Tide Watchers marks her mainstream debut. Lisa, her husband, and their three children currently reside in her home country of Australia.

The Tide Watchers is part spy novel, part adventure novel, part history lesson and a little bit of romance. It takes place in England and France during Napoleon’s rise. Our hero is in France trying to learn what he can about the soon to be Emperor’s plans and to try and find his employer’s daughter, Lisbeth. She ran away with a French emigre against the wishes of her parents and he did not turn out to be the romantic man she thought he was so now she finds herself working at a tavern and branded a whore by all in the town.

Duncan finds Lisbeth and realizes she could be a help on his mission but is a little reluctant to put her in danger. Lisbeth is not like any other woman he has ever met; she is intelligent, forthright and she speaks her mind. She agrees to work with Duncan and then she wants to go home.

The story is a good one and the writing kept me very engaged. There is a lot of history to draw from in this time period and Ms. Chaplin weaves her fictional players in with historical characters very well. I will admit to feeling at times in the beginning like I dropped into the second book of a series but I soon figured out who everyone was. I believe the author was trying to slowly release information about her characters but it left me a bit confused at times. My biggest complaint and the reason for the 3.5 rating instead of a 4 is the ending. It was obscenely abrupt. In fact I wondered if my advance reading copy was missing a chapter it was that jarring an ending. I am guessing there will be a sequel – if not so much was left hanging it was really crazy. I understand leaving the readers anxious for another book but this was more than that – it truly felt like information was missing.