The Trustworthy One by Shelley Shepard Gray – Book Review

I enjoy reading Amish fiction now and then – although not as much lately as I had in years past. I was struck with the synopsis of The Trustworthy one by Shelley Shepard Gray and was happy to accept a copy at no charge for my honest review. 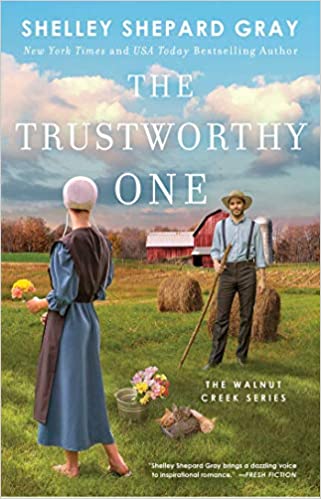 About The Trustworthy One:

New York Times and USA TODAY bestselling author Shelley Shepard Gray returns to the charming and evocative Walnut Creek Series with an unforgettable novel following one broken young woman whose search for peace leads her back to her hometown, where she rediscovers her faith and reconnects with those she loves most.

Kendra Troyer always knew she would leave Walnut Creek the first chance she got. When she was accepted into design school, she tried her best not to look back at the four siblings she was abandoning, but ahead to Columbus, where she was determined to stay—far away from her abusive home and far away from Nate Miller, the boy she vowed to despise for the rest of her life.

Though she suffered through dark times in Columbus, Kendra found her faith in the Lord again, and years later, when she learned one of her good friends had died, she realized it was time to go home to those she left behind.

Back in Walnut Creek, Kendra has a life she never could have imagined: her own design shop, a pretty little house, and a tight-knit group of friends. After she settles down, though, unexpected visitors come knocking and dark memories begin to resurface. Complicating things even further is the ever-present Nate Miller, who now owns the hardware store two doors down and whose very presence stirs in Kendra a fierce need to turn away and hide from her past. But Nate is persistent in setting things right between them.

As Kendra tries to come to terms with the anger she holds from her childhood, will she be able to open her heart to forgiveness and find the comfort she has always longed for in Walnut Creek?

A practicing Lutheran, Shelley Shepard Gray is the New York Times and USA TODAY bestselling author of more than eighty novels, translated into multiple languages. In her years of researching the Amish community, she depends on her Amish friends for gossip, advice, and cinnamon rolls. She lives in Colorado with her family and writes full time.

The Trustworthy One tells the story of Kendra Troyer, a young Amish girl who grew up in an abusive household. Her father is an alcoholic and would beat her and the other children while her mother did nothing. Kendra did everything she could to rear her siblings but when presented with an opportunity to get away she did even though she felt guilty for leaving her younger brothers and sister.

Now Kendra is back in Walnut Creek and she is opening a shop. One of the first people she sees is Nate Miller and he is probably one of the last she wants to see as he hurt her very badly when she was still living in town. But Nate doesn’t remember this and now he sees Kendra with new eyes. They will have to find their way through old hurts to rekindle their friendship.

Kendra’s sister Naomi makes a surprise return too. She had gone to live with their grandparents to get away from their home situation but now Naomi can’t deal with the strictures and her grandparents refusal to see that their daughter is partly to blame to the problems in the house.

I really enjoyed this book because it wasn’t the typical Amish tale. Kendra is a very complicated heroine – she didn’t grow up in a perfect household and she is very flawed but she doesn’t let that stop her or get her down. She works hard at her problems and she tries to help others around her. The romance between her and Nate was sweet – this is Amish fiction so it’s not going to be anything else but sweet. He’s a really good guy with a heart of gold.

The book ended nicely but left a lot of questions unanswered so I have to guess there will be further installments in the Walnut Creek Series. That will certainly be something to look forward to.