The second book in the historical mystery series by one of my favorite authors, C.W. Gortner was sent to me at no charge for my honest review. Read on to learn my thoughts on The Tudor Conspiracy. 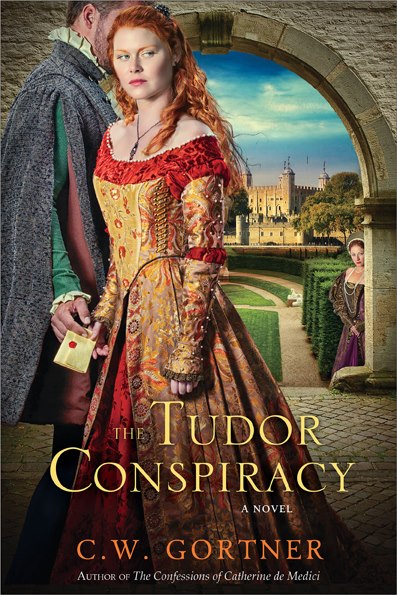 About The Tudor Conspiracy:

US Publication Date: July 16, 2013
UK Publication Date: July 18, 2013
St. Martin’s Griffin
Paperback; 352p
ISBN-10: 0312658494
Hunted by a shadowy foe in Bloody Mary’s court, Brendan Prescott plunges into London’s treacherous underworld to unravel a dark conspiracy that could make Elizabeth queen—or send her to her death in C.W. Gortner’s The Tudor Conspiracy
England, 1553: Harsh winter encroaches upon the realm. Mary Tudor has become queen to popular acclaim and her enemies are imprisoned in the Tower. But when she’s betrothed to Philip, Catholic prince of Spain, putting her Protestant subjects in peril, rumors of a plot to depose her swirl around the one person whom many consider to be England’s heir and only hope—the queen’s half-sister, Princess Elizabeth.
Haunted by his past, Brendan Prescott lives far from the intrigues of court. But his time of refuge comes to an end when his foe and mentor, the spymaster Cecil, brings him disquieting news that sends him on a dangerous mission. Elizabeth is held captive at court, the target of the Spanish ambassador, who seeks her demise. Obliged to return to the palace where he almost lost his life, Brendan finds himself working as a double-agent for Queen Mary herself, who orders Brendan to secure proof that will be his cherished Elizabeth’s undoing.
Plunged into a deadly game of cat-and-mouse with a mysterious opponent who hides a terrifying secret, Brendan races against time to retrieve a cache of the princess’s private letters, even as he begins to realize that in this dark world of betrayal and deceit, where power is supreme and sister can turn against sister, nothing—and no one—is what it seems.

C.W. Gortner is the author of The Last Queen, The Confessions of Catherine de Medici, The Queen’s Vow and The Tudor Secret. He holds an MFA in Writing, with an emphasis in Renaissance Studies. Raised in Spain and half Spanish by birth, he currently lives in the San Francisco Bay Area.
He welcomes readers and is always available for reader group chats. Please visit him at www.cwgortner.com for more information.

This is the second of three books in the Spymaster series featuring Brendan Prescott. I enjoyed the first and I must write that The Tudor Conspiracy is even better. Brendan is coming into his own as a character and he learns the truth of his parentage so by the end of the story he at least has a better sense of his place in the world – although he is still and will always be Elizabeth’s fervent follower.  It is, I suppose, difficult for a writer to take well trodden material and write what many will see as just “another Tudor book.” But I have to note that Mr. Gortner has made the oft told tale of the Wyatt Rebellion seem fresh by telling the story from his fictional character’s point of view and making the Rebellion a minor part of the book.

Brendan is fictional but he mixes easily with many well documented historical figures from Queen Mary to Elizabeth to Cecil. It all rings true due to the seamless way that Mr. Gortner brings together that which is known with that which he draws from his imagination. He creates a well drawn world where his characters are comfortable and his readers can enjoy their adventures.

In this book Brendan walks a fine line as he ostensibly works for Mary while spying for Elizabeth while trying to stay alive with various factions trying to kill him. He does have an astounding capability for staying alive in the most dangerous of situations – but he is a HERO. If you are looking for a page turning foray into a Tudor spy novel The Tudor Conspiracy will satisfy with beach read sensibility and a leading man that you can’t help but love.

Other Books by C.W. Gortner:

THE CONFESSIONS OF CATHERINE DE MEDICI