The Turncoat by T.J. London – Blog Tour and Book Review

I have noted previously that I am trying to read more American historical fiction. The Turncoat by T.J. London fits that bill perfectly. I thank Historical Fiction Virtual Book Tours for sending me a copy at no charge for my honest review. 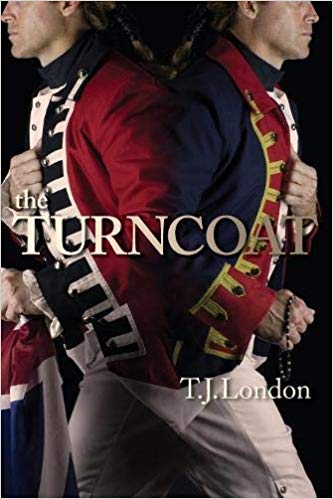 Spy. Redcoat. Traitor. After Captain John Carlisle’s dance with death, he’s retreated to the serenity of the Oneida village with his beloved Dellis McKesson, trying to hide from the inevitable truth that war is coming to the Mohawk River Valley. But when duty calls and John’s expertise is needed to negotiate a treaty between the Six Nations of Iroquois and the Crown, he’ll once again be faced with a decision: his King or his conscience.Many secrets have yet to be revealed, and a deal with the Devil made in desperation, threatens to ruin Dellis and John’s hard-won love. As ghosts of the past resurface, and bitter family rivalry exposes betrayal from those closest to her, Dellis is dragged down a devastating path to the truth of her parents’ murders.The die is cast as St. Leger and his native allies siege Fort Stanwix in the Summer of 1777. The British are planning a secret attack that will force the Rebels and the Oneida to face off against the Crown and their allies, further dividing John’s loyalties, leaving him on the precipice of a decision: Rebel or Redcoat?

T.J. London is a rebel, liberal, lover, fighter, diehard punk, and pharmacist-turned-author who loves history. As an author her goal is to fill in the gaps, writing stories about missing history, those little places that are so interesting yet sadly forgotten. Her favorite time periods to write in are first and foremost the American Revolutionary War, the French Revolution, the French and Indian War, the Russian Revolution and the Victorian Era. Her passions are traveling, writing, reading, barre, and sharing a glass of wine with her friends, while she collects experiences in this drama called life. She is a native of Metropolitan Detroit (but secretly dreams of being a Londoner) and resides there with her husband Fred and her beloved cat and writing partner Mickey.

Aaaah, how I wish I had read the first two books in this series. Not because this book didn’t stand alone but rather because The Turncoat was so good. John Carlisle is a British officer in love with Dellis McKesson, are in love and planning their wedding. This is to be celebrated as there is much against them; from Delllis’s mixed heritage to John’s conflicted feelings on the coming war to Dellis’s bitter brother.

The wedding is only one of many plots that are all expertly woven together in a tale that takes the reader back to the time before the colonists became independent. The locus around which all the stories circle is the relationship between the tribes of the Oneida and whether they will stand with the British or fight with the rebels.  The fight is just starting and sides have to be chosen. Of course we now know how it all played out but when it was happening no one knew which side was going to win.

The Turncoat takes the reader on a rich and complex journey with a cast of characters that are not easily forgotten. John and Dellis are trying to forge a relationship when forces are trying very hard to pull them apart. Those forces include both his brother and her brother. But they also have a strong support system – if only they could learn to trust each other.

As John works with his fellow British soldiers to try and get the Native Americans on their side he also must decide if he is on the side of the British or the Oneida as he has strong feelings for the people from which Dellis comes. He saved them once and so feels a responsibility. But a time might come where he will have to make a choice – which side will he be on?

The Turncoat is a book that keeps you turning the pages, always wanting to know what will come next. Even when things might seem settled, they are not. I very much want to pick up the first two books in the series because I believe they will enrich my understanding of this piece of the saga. It’s definitely great by itself but I think it would be awesome with all of the backstory.

The attention to detail in the historical details truly pulls the reader into the story. Ms. London’s extensive research shows in all the right ways. It’s the kind of book where you really feel like you are in the story with the characters because the writing invites you into the tale. I love those kind of books.