The first book I read by Amanda Skenandore was excellent so when offered her new book, The Undertaker’s Assistant, I jumped at the chance to read it. I thank Historical Fiction Virtual Book Tours for sending me a copy at no charge for my honest review. 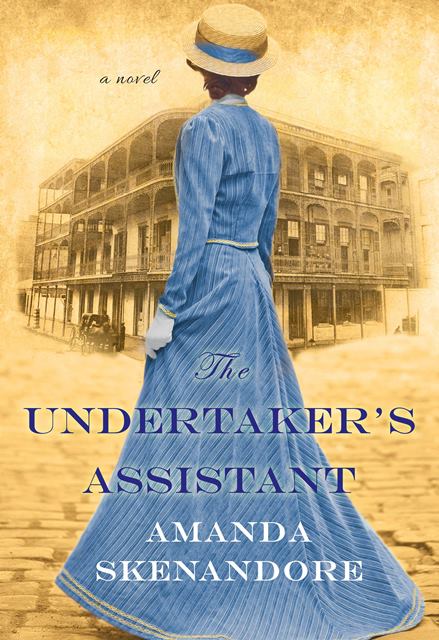 About The Undertaker’s Assistant:

“The dead can’t hurt you. Only the living can.” Effie Jones, a former slave who escaped to the Union side as a child, knows the truth of her words. Taken in by an army surgeon and his wife during the War, she learned to read and write, to tolerate the sight of blood and broken bodies—and to forget what is too painful to bear. Now a young freedwoman, she has returned south to New Orleans and earns her living as an embalmer, her steady hand and skillful incisions compensating for her white employer’s shortcomings.

Tall and serious, Effie keeps her distance from the other girls in her boarding house, holding tight to the satisfaction she finds in her work. But despite her reticence, two encounters—with a charismatic state legislator named Samson Greene, and a beautiful young Creole, Adeline—introduce her to new worlds of protests and activism, of soirees and social ambition. Effie decides to seek out the past she has blocked from her memory and try to trace her kin. As her hopes are tested by betrayal, and New Orleans grapples with violence and growing racial turmoil, Effie faces loss and heartache, but also a chance to finally find her place . . .

Amanda Skenandore is a historical fiction writer and registered nurse. Between Earth and Sky was her first novel. She lives in Las Vegas, Nevada. Readers can visit her website at www.amandaskenandore.com.

Effie is a young woman who, thanks to having escaped slavery during the Civil War is now trained as an undertaker’s assistant. She was found by a Union officer who took her in and encouraged her intelligence. He taught her what she knows but even though he took her in, she would never really be part of the family or replace the child he and his wife lost. It was time for her to go back from where she came and maybe find her people. So Effie returns to New Orleans after the War and talks herself into a job with an aging, conflicted undertaker.

Effie goes about her work learning that while much has changed in her world, it is also true that little has changed in the way she is treated. Her presence is tolerated because of her boss but she is still perceived as little more than a servant. She is doing the bulk of the work and it is thanks to her that the business has revived.

As Effie finds her confidence she starts to explore the city where she stumbles into a political meeting. There she meets a man that steals her breath. She quickly falls under his spell, as he gives her the kind of attention she has never received before. She also meets a young woman and makes a friend for the first time. Both of them help her to find her roots but with limited success. She does find a semblance of family with the people she meets, but as tensions start to flair between black and white in the city it could all be lost.

This was a fascinating book for a number of reasons from the ghoulishness of the embalming to the class divisions of black New Orleans pre and post Civil War. Effie has been far removed from all of this as she ran away when she was a child and was living with a Union family. The politics of the changing city and the cultural upheavals are a whole new arena of education for Effie. One she navigates in a less certain way than she did her studies for her profession for there is no scientific surety in dealing with emotions and feelings.

Ms. Skenandore kept me rapt from page 1 to the very end of the book. This most unusual character really got under my skin; she was not immediately likable as Effie is quite prickly. But it’s because she holds herself so closely. Life has given her some extraordinary opportunities for her time but it has not been particularly kind to her. It’s a rich story about an equally rich culture. Reconstruction was not a magical time fo the suddenly freed slaves in the US. Many were suddenly adrift with no means of support and little sympathy from the white populace of the South.

This book offers a small insight into what that might have been like. Put yourself in the shoes of of a smart young woman as she tries to do here best to survive.

During the Blog Tour, we are giving away two signed copies of The Undertaker’s Assistant by Amanda Skenandore! To enter, please use the Gleam form below.

– Giveaway ends at 11:59 pm EST on August 15th. You must be 18 or older to enter.
– Giveaway is open to the US only.
– Only one entry per household.
– All giveaway entrants agree to be honest and not cheat the systems; any suspicion of fraud will be decided upon by blog/site owner and the sponsor, and entrants may be disqualified at our discretion.
– The winner has 48 hours to claim prize or a new winner is chosen.