A new book is like finding a new friend. Some of them you keep forever, others fade away. What will The Vintner’s Daughter by Kristen Harnisch be? Read on to find out. I was sent my copy at no charge. Of course all opinions are my own. 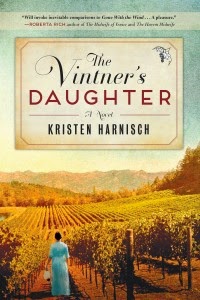 Loire Valley, 1895. When seventeen-year-old Sara Thibault’s father is killed in a mudslide, her mother sells their vineyard to a rival family whose eldest son marries Sara’s sister, Lydia. But a violent tragedy compels Sara and her sister to flee to New York, forcing Sara to put aside her dream to follow in her father’s footsteps as a master winemaker. Meanwhile, Philippe Lemieux has arrived in California with the ambition of owning the largest vineyard in Napa by 1900. When he receives word of his brother’s death in France, he resolves to bring the killer to justice.

Sara has traveled to California in hopes of making her own way in the winemaking world. When she encounters Philippe in a Napa vineyard, they are instantly drawn to one another, but Sara knows he is the one man who could return her family’s vineyard to her, or send her straight to the guillotine.

This riveting tale of betrayal, retribution, love, and redemption, Kristen Harnisch’s debut novel immerses readers in the rich vineyard culture of both the Old and New Worlds, the burgeoning cities of late nineteenth-century America and a spirited heroine’s fight to determine her destiny.

Kristen Harnisch is chef, chauffeur, laundress, nurse, shrink, shopper, and maid servant to three young children and one terrific husband by day, and a novelist by night (or anytime in between when she can scribble down a flitting thought).
She loves vanilla skim lattes, dark chocolate, and inspirational stories.  The intention of her blog is to encourage every mom, regardless of age, to pursue her ‘creative path’ by sharing stories of moms who are doing it and by chronicling the joys and challenges of her own writing life.

The Vintner’s Daughter begins in France just at the end of the 19th century on a vineyard in the Loire Valley in France. Sara Thibault loves following her father around as he cares for the vines and learning all he knows about growing grapes and making wine. Her sister Lydia is only concerned about her upcoming wedding – to a man Sara does not like – and her mother feels that Sara should be more concerned about womanly pursuits. Her father has some concerns about the harvest in this year because he expenses are tight and there is disease in some vines. Crisis strikes and it turns out that only Lydia’s marriage can save the family but the vineyard will now belong to her husband’s family. Sara is distraught and it only gets worse when her new brother in law turns out to be a violent and abusive man.

Circumstances lead to Sara ending up in America and seeking a new life in the Napa Valley where her love of and knowledge for growing grapes helps her establish herself and she thrives. Until her past comes back to remind her that she left France with secrets that are threatening to ruin all she has come to love.

I enjoyed this novel; in fact I read it in one sitting. It wasn’t perfect – some plot points were just too facile and some of the more difficult passages were too lightly treated and easily left to move on to the next plot point. The explanations about growing grapes in the beginning chapters were also a bit dry – that got better later in the book. That being written I found the story to be otherwise well developed and the history included quite interesting. The Suffragettes so all fired to get to vote to bring in prohibition had no clue of what they would bring down, did they?

If you are looking for a fascinating look into the world of wine making with a look back to its start  in California with a bit of romance and intrigue then I recommend this book to you.

Other Books about WWI:

THE CALIFORNIA WIFE BY KRISTIN HARNISCH

UNDER THE SAME BLUE SKY BY PAMELA SCHOENEWALDT

No Man’s Land by Simon Tolkien