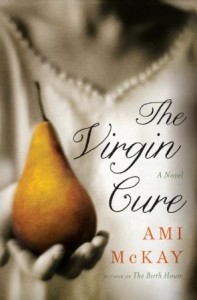 • Hardcover: 336 pages
• Publisher: Harper (June 26, 2012)
From the author of the number one Canadian bestseller The Birth House comes the story of a young girl abandoned to the streets of post-Civil War New York City.
“I am Moth, a girl from the lowest part of Chrystie Street, born to a slum-house mystic and the man who broke her heart.”
Set on the streets of Lower Manhattan in 1871, The Virgin Cure is the story of Moth, a girl abandoned by her father and raised by a mother telling fortunes to the city’s desperate women. One summer night, twelve-year-old Moth is pulled from her bed and sold as a servant to a finely dressed woman. It is this betrayal suffered at the hands of her own mother that changes her life forever.
Knowing that her mother is so close while she is locked away in servitude, Moth bides her time until she can escape, only to find her old home deserted and her mother gone without a trace. Moth must struggle to survive alone in the murky world of the Bowery, a wild and lawless enclave filled with thieves, beggars, sideshow freaks, and prostitutes. She eventually meets Miss Everett, the proprietress of an “Infant School,” a brothel that caters to gentlemen who pay dearly for “willing and clean” companions—desirable young virgins like Moth.
Moth also finds friendship with Dr. Sadie, a female physician struggling against the powerful forces of injustice, who teaches Moth to question and observe the world around her. The doctor hopes to protect Moth from falling prey to a terrible myth known as the “virgin cure”—the tragic belief that deflowering a “fresh maid” can cleanse the blood and heal men afflicted with syphilis—that has destroyed the lives of other Bowery girls.
Ignored by society, unprotected by the law, Moth dreams of independence. But there’s a high price to pay for freedom, and no one knows that better than a girl from Chrystie Street.

Ami McKay is the author of the #1 Canadian bestseller The Birth House, the winner of three Canadian Booksellers Association (CBA) Libris Awards and a nominee for the International IMPAC Dublin Literary Award. Her work has aired on various Canadian radio programs, and her documentary, Daughter of Family G, won an Excellence in Journalism Medallion at the 2003 Atlantic Journalism Awards. She is also active with UNICEF and other organizations. Originally from Indiana, she now lives with her husband and two sons in Scots Bay, Nova Scotia.
Website | Facebook | Twitter | Pinterest


This is the story of Moth – a young girl so named by her father who insisted that she be named such before he abandoned her and her mother for another woman. Moth’s mother is ostensibly a fortune teller but she is mostly an alcoholic and cares not a jot for Moth except for the price that she can bring once she is old enough to be sold into servitude. As soon as possible that is arranged and Moth is sold to a an abusive woman who is also just a little bit crazy. With the help of the household butler Moth is able to escape but he also uses her to his own end.


Moth finds herself on the street where she is “recruited” by a young woman into house where a woman sells young virgins to the highest bidder. Moth being very, very young she does not fully understand the ramifications of the food and new clothing she is receiving. A female doctor tries to dissuade Moth from the house but Moth likes her new found freedom and she thinks she is in control of her life.


Little does she know….


What a horrifying story. What a fascinating story. What a look into the ghettos of New York at the turn of the century when children were a commodity and no one cared for the lesser among us. Ms. McKay has written a world that is dark and terrifying but where there is a little bit of light for these poor souls to find. The writing creates the mood and the reader is pulled back in time to a world that hopefully will never reappear. The characters are well drawn and quite compelling; Moth in particular as one would expect in the heroine. Despite the bleak world and the dark subject matter I had a hard time putting the book down. I found myself quite drawn into Moth’s world as she navigated her way from child to adult looking for the basics of life; food, a place to live and the simple comforts of a loving touch from someone that loves you.


You can purchase The Virgin Cure on Amazon.com

Disclosure:  I received a copy of The Virgin Cure from TLC Book Tours. Any opinions expressed are my honest opinions and were not impacted by my receipt of the free book. I received no monetary compensation for this post.