I keep saying I am not going to read any more war books and yet here I am with another war book. This one touches not on the war so much as the impacts of the aftermath and the US occupation of Japan. I thank TLC Book Tours for sending me a copy of The Woman in the White Kimono by Ana Johns at no charge for my honest review. 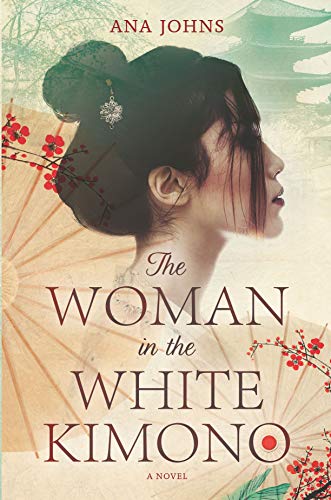 About The Woman in the White Kimono:

Oceans and decades apart, two women are inextricably bound by the secrets between them.

Japan, 1957. Seventeen-year-old Naoko Nakamura’s prearranged marriage to the son of her father’s business associate would secure her family’s status in their traditional Japanese community, but Naoko has fallen for another man—an American sailor, a gaijin—and to marry him would bring great shame upon her entire family. When it’s learned Naoko carries the sailor’s child, she’s cast out in disgrace and forced to make unimaginable choices with consequences that will ripple across generations.

America, present day. Tori Kovac, caring for her dying father, finds a letter containing a shocking revelation—one that calls into question everything she understood about him, her family and herself. Setting out to learn the truth behind the letter, Tori’s journey leads her halfway around the world to a remote seaside village in Japan, where she must confront the demons of the past to pave a way for redemption.

In breathtaking prose and inspired by true stories from a devastating and little-known era in Japanese and American history, The Woman in the White Kimono illuminates a searing portrait of one woman torn between her culture and her heart, and another woman on a journey to discover the true meaning of home.

ANA JOHNS worked over twenty years in the creative arts field, as both a creative director and business owner, before turning her hand to fiction. Born and raised in metro Detroit, she now resides in Indianapolis with her family. The Woman in the White Kimono is her first novel.

My Opinion of The Woman in the White Kimono:

I haven’t read much in regards to the post WWII period in Japan so I was intrigued at the premise of this book. It takes place in two time periods – 1957/58 and today. It bounces back and forth between the two voices of Naoko Nakamura a young Japanese women who falls in love with an American sailor serving during the post war occupation and Tori Kovac, a young woman of today who is caring for her dying father.

Tori’s father gives her a letter at the end of his life and suddenly she learns that there is more to her father than she ever knew. It sends her down a path to try and find the woman in the letter.

Naoko’s story starts with her love for her sailor. They believe that despite the lingering hatred of the Japanese for the Americans she will be able to convince her family of their love. It doesn’t quite work that way as her father has long planned for her to marry the son of business associate. But Naoko’s impulsive decisions lead to consequences that lead to her life spiraling out of control

As these two women share their stories heartbreak is everywhere, but so is redemption.

As is usual with dual timelime tales I far more enjoyed the time spent in the past than the sections written in the present. The author did a remarkable job of bringing the time period to life. It was certainly an education in the horrible treatment that innocent children suffered for their conception. Sometimes that conception was in love and sometimes it was not but it certainly was not the child’s fault and yet that is where the hate was directed. It was also an education in racism and eugenics. I had no idea how awful it was in Japan and how terrible it was for the women who managed to be able to come here to live after the war. Although given the way way this country treated American citizens of Japanese descent I guess I should not be at all surprised.

It is good when a book makes you angry I think. That anger can lead to further thought and reading. It is also good that these stories be told and not be forgotten particularly in this troubling times in which we live. For I fear that much of the lessons of the past are being forgotten. (off soapbox)

This was an excellent book about an unsettling topic. It is very well written and a very compelling read.