The Wonder of All Things by Jason Mott – Blog Tour, Book Review and Giveaway 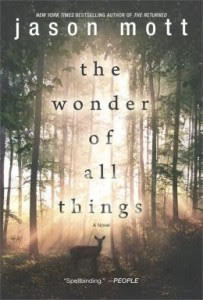 On the heels of his critically acclaimed and New York Times bestselling debut novel, The Returned, Jason Mott delivers a spellbinding tale of love and sacrifice

On an ordinary day, at an air show like that in any small town across the country, a plane crashes into a crowd of spectators. After the dust clears, a thirteen-year-old girl named Ava is found huddled beneath a pocket of rubble with her best friend, Wash. He is injured and bleeding, and when Ava places her hands over him, his wounds disappear.

Ava has an unusual gift: she can heal others of their physical ailments. Until the air show tragedy, her gift was a secret. Now the whole world knows, and suddenly people from all over the globe begin flocking to her small town, looking for healing and eager to catch a glimpse of The Miracle Child. But Ava’s unique ability comes at a great cost, and as she grows weaker with each healing, she soon finds herself having to decide just how much she’s willing to give up in order to save the ones she loves most.

Elegantly written, deeply intimate and emotionally astute, The Wonder of All Things is an unforgettable story and a poignant reminder of life’s extraordinary gifts.

JASON MOTT holds a BA in fiction and an MFA in poetry both from the University of North Carolina at Wilmington and is the author of two poetry collections. His writing has appeared in numerous literary journals, and he was nominated for the 2009 Pushcart Prize. In addition to the rare achievement of receiving starred reviews from all four of the top publishing industry magazines—Publishers Weekly, Library Journal, Booklist, and Kirkus Reviews—The Returned was named a “People Pick” by People magazine, and was featured in Essence, Entertainment Weekly, Washington Post, among others.  Mott also appeared on numerous broadcast programs including NPR’s All Things Considered and Tell Me More, The Travis Smiley Show, the nationally syndicated Tom Joyner Radio Show and many local television shows across the U.S. Mott lives in North Carolina.

I read Mr. Mott’s first book, The Returned and really enjoyed it so I was thrilled to be able to read this second book. The synopsis was certainly intriguing with a miracle child at its center. Young Ava is at an air show with her best friend Wash when disaster happens. After the wreckage is cleared Ava and Wash are found under some rubble; Ava is unhurt but not so Wash. Ava knows she can’t let her friend die so she ….doesn’t. She does not know how she does it but she heals him of his injury. Word of this miracle spreads and soon Ava’s life becomes a nightmare as everyone wants something from her. Everyone.

Her father is sheriff in their small town and is completely bewildered by everything; Ava’s ability, all of the people coming to town, his new wife’s pregnancy. He walks around somewhat lost in a cloud. He does do his best to a point to keep Ava protected but he is as curious as everyone else as to how it works and why she can do it. To the point that he doesn’t see what it costs her.

Wash keeps Ava somewhat grounded as it is his presence that always helps her recover. Every time she uses her gift she finds herself giving up part of her life force. Despite this the popular opinion is that she should cure people until she dies. She has been given this gift so she should use it, right? Even if it hurts her. No one bothers to ask what SHE wants.

I was drawn into this book from the very first page and except for having to sleep (drat that sleep!) I would have finished it in one fell swoop. Mr. Mott really knows how to turn a phrase. This is not the happiest of tales but for some reason I did not feel sad at the end. The ending did leave me a little let down – I understand where it was going but it just fell a little flat for me. I understand why Ava did what she did – she really missed her mother and the healings brought her closer despite the cost to her body. It’s a book the almost requires a second read. There is a lot going on, some of it on a different level. It’s a book that requires some thought. A book well worth reading.

You can read my review of The Returned

You can purchase The Returned

One lucky US reader will win a copy of The Wonder of All Things. Just enter as many ways as you’d like on the Gleam widget. Rules are on the widget. Good luck everyone.

The Wonder of All Things