The Years That Followed by Catherine Dunne – Book Review

I received a free copy of The Years The Followed from the publisher for my honest review. 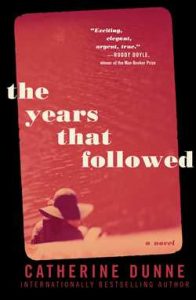 Revenge is sweeter than regret…

Dublin. Calista is young, beautiful, and headstrong. When she falls in love with the charming, older Alexandros and moves to his native Cyprus, she could never imagine that her whirlwind courtship would lead to a dark and violent marriage. But Calista learns to survive. She knows she will find peace when she can finally seek retribution.

Madrid. Pilar grew up with very little means in rural Spain and finally escaped to a new life. Determined to leave poverty behind her, she plunges into a life of working hard and saving money. Enchanted by an older man, Pilar revels in their romance, her freedom, and accruing success. She’s on the road to achieving her dreams. Yet there is one thing that she is still searching for, the one thing she knows will make her truly happy.

Sweeping across the lush European backdrops of Spain, Greece, and Ireland, The Years That Followed is a gripping, modern telling of a classic story. As two wronged women plot for revenge, their intricately crafted schemes send shockwaves through their families that will echo for many generations to come.

Catherine Dunne is the author of nine novels including The Things We Know Now, which won the Giovanni Boccaccio International Prize for Fiction in 2013 and was shortlisted for the Novel of the Year at the Irish Book Awards. She was recently long-listed for the inaugural Laureate for Irish Fiction Award 2015. Her work has been translated into several languages. She lives in Dublin.

This book kept me wondering to the end. I am trying to include more contemporary fiction in my reading and while this one did go back and forward in time it is a tale of love, hate, betrayal and revenge more than anything else. It entwines the lives of two women who are wrapped up with the men of the same family although they don’t know each other and it is only fate (karma? kismet?) that even brings them into each other’s orbit.

Calista is a young girl in Ireland who longs to escape what she feels is her boring life with her parents. As is the case with most teenagers she feels she knows more than her mother and longs to break out and see the world. She thinks that escape is going to come by way of her relationship with a work colleague of her father. She dates this older man behind her parent’s back and soon she is getting married not realizing that his “devotion” is nothing more than obsessive possession.

Pilar’s story  is not as  clearly defined and in some ways it seems to be there only as a foil for Calista’s revenge. She is the daughter of an abusive man married to a woman who loved another. As her mother lays dying she tells Pilar to get out of their small village – do it NOW she says or you never will. She gives her some money she had hidden and the name of a lawyer in the city who will help her. Pilar suspects this is the man her mother loves.

Calista withers within her marriage and finally cracks and tries to leave but her husband’s family is powerful. She gets away but cannot take her children. It’s a devastating choice but one she feels she must make because she doesn’t think she will survive otherwise. Pilar, on the other hand blossoms. She works hard, saves and invests with the help of the lawyer and soon finds herself wealthy. Wealthy but not necessarily happy. She has not found love. But then one day she meets a man and she falls hard. The only problem – he’s married. But that doesn’t stop Pilar from falling in love, even though he is honest in that he will never leave his wife.

At this point it gets hard to further discuss the plot without spoiling some of the twists and turns. And there are a lot of twists and turns. It’s part of what makes the book such an interesting read. It’s also part of what makes the book such a head shaker – you just wonder at the coincidences. But if you can just ignore that little voice in your head and just read you will find yourself in a real page turner of a book. It’s not perfect but it does bring you full circle on the odd turns of life.

All purchase links are affiliate links which means I receive a small commission if you make a purchase. This helps me to keep the Farm cats in treats.