Richard III was left to history with a horrible reputation thanks to Shakespeare but there has always been a contingent of folk that fought to repair what the Tudors wrought. With the finding of his skeleton in a car park there has been renewed interest in his story. I have long been fascinated by this enigmatic man. That is why I was beyond thrilled to be offered This Son of York by Anne Easter Smith at no charge from Historical Fiction Virtual Book Tours for my honest review. I have read other books by the author and thoroughly enjoyed them 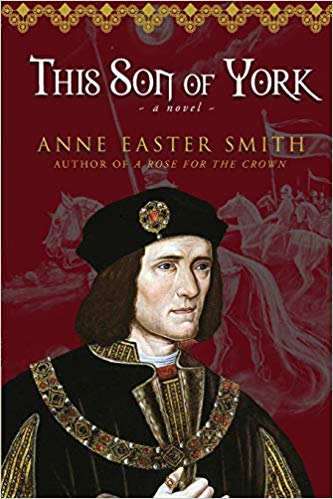 About This Son of York:

Richard III. A man. A king. A legend.

He ruled England for only two years, but the legacy of Richard III remains both fascinating and divisive.

From his childhood in the intensely loyal and close-knit York family to his rise as a thoughtful but troubled ruler, This Son of York is a passionate and deeply personal account of the life of Richard III. A man who loved his family and his country. A king who struggled to overcome the challenges not only of a turbulent time but his own human frailties. A legend whose true life is only now coming to light.

Inspired by the discovery of Richard III’s grave and its revelations, award-winning author Anne Easter Smith brings together her decades of intense research, five celebrated novels on the Wars of the Roses, and her sustained passion for Richard III in this culminating book on the last Plantagenet king.

In my novels, I strive to serve those readers who are looking for accuracy in historical fact and yet also engage those who are looking for a good story with strong characters, a little romance and lots of period detail. My sixth book, This Son of York, completes my series about the York family during the Wars of the Roses and all are for those readers who enjoy settling into a book and living with the characters for a good long time.

I spent my childhood in England, Germany and Egypt as the daughter of a British Army colonel. At my boarding school in Surrey a teacher we called “Conky” — after William the Conqueror — inspired my passion for history. When in my early 20s, I read Josephine Tey’s “A Daughter of Time”, I became particularly fascinated by Shakespeare’s so-called villain, Richard III. After six books and sixty years of studying this period, I am regarded as somewhat of an expert on Richard III, and as such was interviewed on NPR after DNA proved that the bones found under a car park in Leicester, UK were indeed Richard’s.

When I’m not writing, I can be found either on the local stage or weeding my garden, the latter which I hate almost as much as I do sewing! My husband, Scott, and I live on Boston’s North Shore and love biking, traveling, reading and sailing, I should also add that I’m a member of the Richard III Society and the Historical Novel Society.

Most people know Richard III from Shakespeare’s depiction – a misshapen, power grabbing, power grabbing man who sought the crown. This story was written after Richard’s defeat by Henry Tudor and as we all know history is written by the victors. Henry never felt fully secure on his throne so he did all that he could to destroy the reputation of any and all Plantagenets, living or dead.

This Son of York tells an alternate tale of Richard starting with his early years as his witnesses the the horror of war when the forces of Henry VI overrun Ludlow and force his father and older brothers to flee. He and his brother George along with his mother are then “guests” of the Crown until his father and older brothers returned many years later. He grew up hearing tales of his family’s right to the throne. How their line was stronger than that of Henry VI’s. Henry was also not the best king with his bouts of madness.

Soon, as history tells us his father and brothers come back and his father provactively forces Henry to accept the York line as his heir, disinheriting his own son. This does not prove the perfect solution and it leads to more war with York dead on the battlefied and his son claiming the throne as Edward IV.

But this is Richard III’s story and Ms. Easter Smith uses the big historical moments to show how they molded this 4th son of York to become the last Plantagenet king. At the start of each section she shares a paragraph or two from the modern day discovery of Richard’s bones. It was interesting and discordant – I had read many articles when the discovery was made as these types of archeological stories are very compelling.

I fell quickly into the world of the Nevilles, Yorks, Warwicks, et al and found myself lost in time and place. The War of the Roses was a violent time in England’s history as cousins fought each other over who should rule. It all ended when Henry Tudor killed Richard III. I’m not giving anything away as history is history. Ms. Easter Smith brings Richard to life in all ways; not perfect but not a monster either. I can’t say that I read this straight through or in one sitting – it’s so intense a story, but it’s a very compelling book and one that helps to reset the record on this king.

During the Blog Tour, we are giving away a copy of This Son of York by Anne Easter Smith! To enter, please use the Gleam form below.

– Giveaway ends at 11:59 pm EST on November 17th. You must be 18 or older to enter.
– Paperback giveaway is open to the US only.
– Only one entry per household.
– All giveaway entrants agree to be honest and not cheat the systems; any suspicion of fraud will be decided upon by blog/site owner and the sponsor, and entrants may be disqualified at our discretion.
– The winner has 48 hours to claim prize or a new winner is chosen.

This Son of York 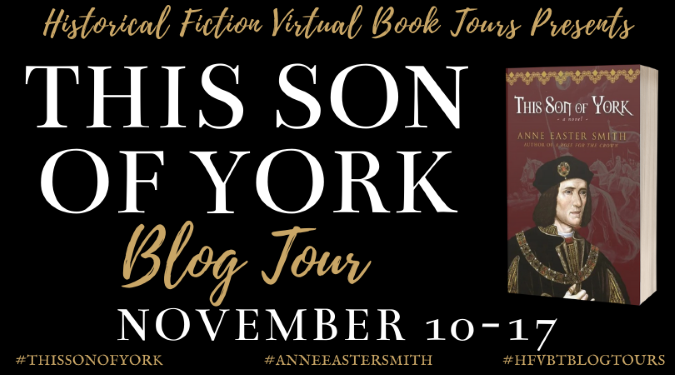