I received a free copy of Three Souls from TLC Book Tours for my honest opinion. 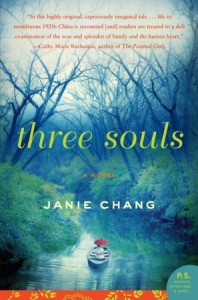 • Paperback: 496 pages
• Publisher: William Morrow Paperbacks (February 25, 2014)
An absorbing novel of romance and revolution, loyalty and family, sacrifice and undying love
We have three souls, or so I’d been told. But only in death could I confirm this….
So begins the haunting and captivating tale, set in 1935 China, of the ghost of a young woman named Leiyin, who watches her own funeral from above and wonders why she is being denied entry to the afterlife. Beside her are three souls—stern and scholarly yang; impulsive, romantic yin; and wise, shining hun—who will guide her toward understanding. She must, they tell her, make amends.
As Leiyin delves back in time with the three souls to review her life, she sees the spoiled and privileged teenager she once was, a girl who is concerned with her own desires while China is fractured by civil war and social upheaval. At a party, she meets Hanchin, a captivating left-wing poet and translator, and instantly falls in love with him.
When Leiyin defies her father to pursue Hanchin, she learns the harsh truth—that she is powerless over her fate. Her punishment for disobedience leads to exile, an unwanted marriage, a pregnancy, and, ultimately, her death. And when she discovers what she must do to be released from limbo into the afterlife, Leiyin realizes that the time for making amends is shorter than she thought.
Suffused with history and literature, Three Souls is an epic tale of revenge and betrayal, forbidden love, and the price we are willing to pay for freedom.

Born in Taiwan, Janie Chang spent part of her childhood in the Philippines, Iran, and Thailand. She holds a degree in computer science and is a graduate of the Writer’s Studio Program at Simon Fraser University. Three Souls is her first novel.
Find out more about Janie at her website, follow her on Twitter, and connect with her on Facebook.

I was captivated from the very first sentence of Three Souls. I read it in almost one sitting – it was quite hard to put down. It opens with the protagonist Leiyin, watching her funeral. She knows she is dead but wonders why she hasn’t gone on to her afterlife. She sees her three souls dancing around almost leading her somewhere, but where? She soon finds out that she has done some serious wrong and she needs make amends before she can get to that afterlife but she doesn’t understand. Understanding she learns will come with reflection upon her life. So we are taken on the journey with her a Leiyin narrates her past – explaining her actions, often rationalizing them. Clarity comes in hindsight.

Leiyin was a teenager, a teenager with intelligence in a time that did not value women with brains. Nor did it value women that pushed back against tradition. Despite her thinking she had some level of control in her life she soon learned that she did not. But she also refused to accept that perhaps her father might have her best interests at heart.

She was a child of privilege in a time of upheaval. Like most teenagers she had no idea of the politics or coming changes. As she looks back on her life and discusses it with her souls – I know that sounds odd but it works – a bigger picture emerges and Leiyin has the advantage of that hindsight I mentioned above.

I loved the way the character developed even it there were time I really did not like Leiyin. She was a very spoiled little girl. Ms. Chang was able to weave the history and politics into the story without it seeming like a lesson. This is a book I’ll keep for a second read as I’m sure I’ll find things that I missed the first time through.

You can see the Three Souls Tour Schedule

You can purchase Three Souls on Amazon.com

Share
Pin
Yum
Share
Email
blog tour and book reviewJanie ChangThree Souls
I’m Ready for a Night on the Town
Why Be You When You Can Be Moi?